Professed gamer and driver of the no. 38 car snags the coveted cover athlete spot for upcoming racing game.

NASCAR driver Elliott Sadler has always been into games, but now he's on one. Electronic Arts today announced that Sadler will grace the cover for its upcoming NASCAR 07 on the Xbox and the PlayStation 2, as well as NASCAR on the PSP.

"I'm thrilled that EA has chosen me as their cover athlete for the game this year," said Sadler, who has been involved with the gaming franchise for years. "I've been a big fan of this game for a while now and play it as often as I can whether I'm on the road or at home."

NASCAR 07 will feature a new Momentum Meter that builds up as players escape from dangerous situations, as well as drivers with "real-world attributes and ratings," the ability to fine-tune car handling with a sliding scale, and Skill Points that can be risked against other drivers, with winnings being used for upgrades.

The PSP edition of NASCAR adds a rewind feature that gives players a second chance when their first attempt at a pass or skillful negotiation of a turn ends poorly. And while the PSP game won't feature the team commands from last year's NASCAR game, it will incorporate that game's on-track rivalries system.

Both versions of NASCAR 07 and NASCAR for the PSP are rated E for Everyone and set for release September 6. 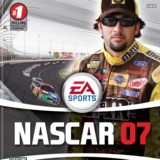