Game publisher and gridiron guru will continue relationship despite EA's deal with ESPN and Madden's departure from ABC in 2006.

The name John Madden not only is synonymous with exemplary football coaching, the NFL broadcast booth, and the Franken-fowl Thanksgiving treat Turducken, but is the name to know for football simulation games.

It would be hard to imagine an Electronic Arts-published NFL game named "NFL Live 2007," or simply "NFL 2007." And thanks to an agreement announced today, football gamers won't have to entertain such thoughts--at least for a few years. The publisher today revealed that it has reached a multiyear agreement with Madden to use the former coach's voice, likeness, name, and football know-how in future iterations of the popular franchise.

EA and John Madden first hooked up in 1989 with John Madden Football for Apple II computers. It was the first football game to feature 11-on-11 action, and it featured realistic playbooks, a marvel for its time. Madden doesn't just sit idle, do some voice work, and collect a paycheck. The former Philadelphia Eagle and coach of the Oakland Raiders often gets in the trenches with the producers and goes hands-on into the development of the game, helping give the franchise the authenticity that has made it such a success among hardcore football fans.

"I am proud that we started to develop Madden Football 20 years ago," said Madden. "Each year our goal is to improve the game, and with EA, we have been able to do that."

The deal ended speculation that EA would drop the Madden name after acquiring the exclusive rights to the NFL and signing a 15-year deal with ESPN.

This isn't the first contract Madden has put his John Hancock on this year. Adding to the belief that EA (now in cahoots with ESPN) and Madden would part ways was the fact that Madden will be leaving ABC's Monday Night Football to get behind the microphone of NBC's Sunday Night Football in 2006. ABC and ESPN are both owned by Disney.

Madden, who never actually stepped on the field as an NFL player after a knee injury, coached the Oakland Raiders to a Super Bowl in 1976. After retiring from the sidelines with the second-highest winning percentage of any coach (behind the legendary Vince Lombardi), he moved on to become an NFL analyst and has won several Emmy awards. Madden, who goes from destination to destination in a tricked-out RV called "The Maddencruiser" because of a severe fear of flying, ranked number 78 on Forbes' top 100 list of celebrities.

Madden NFL 06 is scheduled for release on August 9 for multiple platforms. For more information on the game, head over to GameSpot's previous coverage. 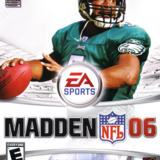