A small player with big dreams.

Earlier this week we reported on a strange bug in Madden NFL 15 that made Browns rookie linebacker Christian Kirksey, who's 6'2", 235 lbs in real life, appear as a tiny, barely foot tall player in the game's Tennessee Titans Solo Challenge within Madden Ultimate Team.

The hilarious sight of a miniature linebacker up against other hulking football players made the rounds online in pictures and YouTube videos, so rather than quickly patching the bug or stay quiet about it, Electronic Arts is embracing it.

The publisher is encouraging Madden NFL 15 owners to play with the tiny version of Kirksey themselves while they can.

Today, EA also released the video above featuring Kirksey himself.

Madden NFL 15 was released on August 26. For more on the game check out GameSpot's review and what other critics are saying. 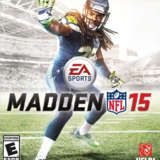