Nerf and Littlest Pet Shop arrive in the fall for DS and Wii, followed by multiplatform versions of Monopoly, Scrabble, and more.

When Electronic Arts picked up the rights to a variety of Hasbro games last August, it had a slew of new toys to play with it when it came to licensed casual games. Specifically, the agreement gave EA's casual gaming division the chance to make games based on brands like Monopoly, Scrabble, Yahtzee, Nerf, Tonka, and Littlest Pet Shop.

Today EA Casual Entertainment revealed the first concrete glimpse of its Hasbro plans, announcing that the first two console and handheld games to come from the deal will be Littlest Pet Shop and Nerf N-Strike. Both games are being developed by EA's Salt Lake Studio, and will see release this fall on the Nintendo DS and the Wii. A PC edition of Littlest Pet Shop is also in the works.

Littlest Pet Shop will allow players to run their own pet stores, "building relationships" with their products and unlocking new animals, accessories, and playsets. EA will sell three different versions of the game, each with unique pets.

As for Nerf N-Strike, the game is based on the line of soft foam-firing toy guns, and includes perhaps the least deadly deathmatch modes of all time with single and multiplayer modes. EA is also promising a new Nerf blaster that will allow players to "take the action outside as their controller transforms to fire actual NERF darts."

Naturally, EA's plans for the Hasbro brands extend beyond those two titles. The publisher also confirmed that it is working on multiplatform versions of Monopoly and Scrabble, as well as other games to be revealed by the end of the year and a full slate of mobile titles and Pogo.com online offerings. 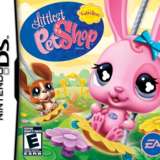