Publisher mines catalog of '90s hits to bring budget-priced compilation to the PSP in November.

Earlier this month, online retailer GameStop posted a descriptive product listing for a PlayStation Portable retro compilation called EA Replay. The write-up said 14 games would be included in the package, which would ship October 3 and carry a $29.99 price.

Today Electronic Arts confirmed the game's existence for GameSpot and corrected a couple of bits the retailer had gotten wrong. In a semiliteral case of "a day late and a dollar short," it turns out Replay will actually ship about a month later than anticipated, November 7 to be precise, and with a more pleasing price point of $19.99.

Under production at EA Canada, Replay will also include features not found in the original games. To better suit some of these titles to gaming on the go, EA is including the ability to save any of these games at any point. Three games, Budokan, Mutant League Football, and Road Rash II, will also feature local wireless head-to-head play, and players will be able to unlock and collect virtual trading cards featuring retro game art.

The 14 games included in the collection are listed below. The versions included in EA Replay will all be taken from the Super Nintendo or Genesis editions of the original titles. 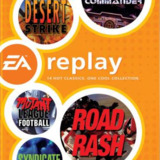