BJ's twin daughters are a lot more fun than he is. 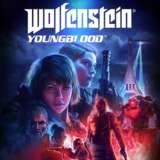 There's something very familiar, and yet very different, about Wolfenstein: Youngblood. The budget-priced spin-off carries on the dark-but-absurd sci-fi Nazi-fighting story of BJ Blazkowicz, but makes enough changes that it feels like something new. Playing a couple of Youngblood's levels ahead of E3 2019, the differences were a bit jarring.

The jarring part is that, as a spin-off game, Youngblood isn't always exactly what you expect from MachineGames' Wolfenstein series. Youngblood overall has more of an arcade bent than the series that spawned it (although it also goes harder on RPG-like aspects--more on that in a minute). As a cooperative game, Youngblood also feels a little less strategic about blasting Nazis than Wolfenstein: The New Order or Wolfenstein II: The New Colossus did. It's delivering a different kind of shooter experience, one that's more about tag-teaming to clear a room and revive each other, while high-fiving along the way.

If you're not familiar, Youngblood is a spin-off cooperative game in which you take on the role of one of BJ's twin daughters, Sophie and Jessica, who battle together throughout the campaign. The other twin is controlled either by another player through online co-op, or by the game's artificial intelligence, but the relationship between Jess and Soph is central to what MachineGames is doing. The two daughters have the fighting spirit and training that made their parents such effective Nazi-fighters, but they're young, inexperienced, and a little goofy. Luckily, they both have Wolfenstein's spiffy power armor, which means they can go toe-to-toe with anything the Nazis can throw at them.

In an interview with GameSpot, executive producer Jerk Gustafsson said the studio is going for a more adventure feel with Youngblood. The game is lighter in tone (as well as in content compared to the main Wolfenstein games--it's a budget title with a $30 price tag) than its predecessors, and its protagonists reflect that.

"It's more of an adventurous type, you know, where we use movies like The Goonies as a reference, for example," Gustafsson said.

In the cinematics leading up to the levels MachineGames previewed, you get a sense of Jess and Soph's upbringing and their wide-eyed optimism despite living in a Nazi-dominated world. The twin teenagers are eager to get into the kinds of scrapes and adventures they've heard about from their parents--apparently BJ's tortured warrior-poet vibe has been lost on his offspring. When they discover their father is missing, Soph and Jess come off like a pair of Nancy Drews or the Hardy Boys (they even refer to each other using the names of the two boy detectives from an in-universe novel series they read). They quickly team with Abby, the daughter of FBI head Grace Walker from The New Colossus, to track BJ down.

Soph and Jess's relationship is constantly on display in Youngblood; their back-and-forth adds a lot of character to the game. Of course, they're a great deal younger than BJ and lack that simmering sense of the horrors of war that has informed MachineGames' take on the character. That lends to the arcade-like Nazi-blasting feel of Youngblood--Soph and Jess are wrecking crowds of Nazis and having a great time doing it.

"We always try to find that sense of humor in everything, even if it's dark," Gustafsson said. "It's also, of course, a serious subject that we have to be a bit careful about, but I do like that dark humor that we have managed to integrate into this. But this being a spin-off, and the way that we're doing it with the '80s [setting], I think it makes sense for us to try to have a little bit lighter tone to it--and try to make it a spin-off in that sense as well, and not always stick to what we have done previously."

From a gameplay standpoint, co-op adds a new dimension to MachineGames' Wolfenstein formula of creating lots of options during combat. Most rooms have multiple entry points, allowing you to slip in steadily or blast your way in, or any combination of the two. With a second person, Youngblood provides you a lot more opportunities to coordinate and work together as you take slightly different paths to the same place. But this is still Wolfenstein--Youngblood is tough, requiring you to take down enemies fast, keep an eye on your health and armor levels, and help each other out. If you get dropped, your teammate can revive you as in other cooperative games. Jess and Soph can also offer each other "pep ups" with a button push; hit it, and the sisters shout some encouragement to one another that results in a small stat boost.

You Got Your RPG In My Nazi Shooter

Youngblood marries its fast co-op combat with several RPG systems that further push it away from the more linear single-player experience of the mainline Wolfenstein games. Once you fight through the first few early levels, you reach a hub area that lets you choose which missions to attack and in what order. Soph and Jess level up as you play the game, and missions are marked by their level difficulty--you can take on the ones above your level if you want, but they're going to be a lot tougher (and award more experience points), Gustafsson explained. Enemies also have levels akin to what you might see in something like Assassin's Creed: Odyssey, along with big health bars that let you see how hard they are to take down.

Like The New Order and The New Colossus, Youngblood also has a perk system that lets you unlock new abilities as you play, but it doesn't function in quite the same way as in the mainline games. Here, the ability to dual-wield guns, throw knives, or execute stealthy takedowns are unlocked piecemeal with experience points, and you can amp up your guns and equipment with Silver Coins you find throughout the game. That makes Youngblood more customizable than the past games, because you can pretty much get whatever you want as you soon as you have the currency required to unlock it. That also lets you give Soph and Jess differing but complementary abilities.

In the two levels we played, working together in levels filled with Nazis was a lot of fun. Wolfenstein's difficulty and quick, responsive gunplay mean that you feel powerful throughout the game, but you also have to work together with your partner in every encounter. Youngblood does a great job of capturing that feeling of two people kicking down a door and wrecking everyone inside, but its largely run-and-gun nature is balanced such that you have to talk to your teammate and work together, or the baddies are going to wallop you with their superior numbers.

Still, the RPG focus and arcade-style action are very different from other Wolfenstein games and take a little getting used to. Youngblood feels a great deal more "gamey" than MachineGames' other titles. That's part of the point here, as Gustafsson said. MachineGames started from the standpoint of wanting to build a co-op game and went from there--but it also wanted to take a different path than it did with The New Order, its spin-off The Old Blood, and The New Colossus.

"The main reason that this game is very different is that we all as a studio, we want to try to do something new and do something different, right?" he said. "And not to say, we might just go back to exactly what we have done previously for the next game, but it's also refreshing for the team. It's fresh air to some extent. We really enjoy it. I think this will probably be our most entertaining game, and it's fun to play."

With a competent friend, Youngblood is a lot of fun thanks to MachineGames' strong handle on its twitch shooter mechanics. That said, with its RPG aspects and more arcadey gameplay, it's different enough that it might put some Wolfenstein fans off who want more of the broodier BJ. Those folks will be missing out on two great characters in Soph and Jess, though; Youngblood might take some getting used to, but Wolfenstein's two new protagonists are worth putting in the time.