It's also coming to consoles next month.

Numantian Games' They Are Billions has been out for a couple of years already, launching on Steam Early Access back in December 2017. Since then, despite receiving a "very positive" reception on Steam, the post-apocalyptic RTS has lacked a full campaign mode--until now. They Are Billions' campaign will arrive just after E3 for free to those who own the game.

The news comes via a tweet from the independent studio. The campaign for They Are Billions, titled The New Empire, launches on June 18. Check out the official two-minute trailer below.

Now Playing: They Are Billions Picks Up Where Starcraft 2 Left Off

Alongside the campaign addition, They Are Billions will receive two new scenarios for its Survival Mode: The Deep Forest and The Caustic Lands. The Deep Forest is the easier of the two, while The Caustic Lands will provide more of a challenge with players facing the Doom Colony that can take up to 30 percent of the map, according to the game's Steam store page.

In a separate tweet, Numantian announced that They Are Billions will make its way to PS4 and Xbox One on July 1. Porting studio BlitWorks--who's responsible for ports of Bastion, Fez, Spelunky, Wargroove, and many more--will handle the console port of They Are Billions.

They Are Billions coming to PS4 and Xbox1 in July!! #theyarebillions #ps4 #XboxOne https://t.co/bn6cVBlcfs

Back in March 2018, we wrote that They Are Billions picks up where Starcraft 2 left off. We said that the game "took the PC world by surprise, providing fantastic real-time strategy elements and a nuanced take on the seemingly endless horde of zombie games," and our editor Mike Mahardy argued that They Are Billions continues the legacy of stellar RTS games like Age of Empires and Command & Conquer. 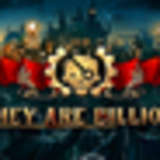