Today during Ubisoft's E3 briefing, the company officially announced Space Junkies, a new virtual reality game from Ubisoft Montpellier. A jetpack-based shooter, Space Junkies is set in space where you have 360-degree freedom of movement. It supports 1v1 or 2v2 gameplay. The game will be available on Oculus Rift (with Touch controller support) and HTC Vive, and is scheduled to launch in Spring 2018.

"Space Junkies is for VR players who are looking for something new and insane and that will get their competitive juices flowing," Ubisoft Montpellier producer Adrian Lacey said in a statement. "We are creating a multiplayer, competitive, adrenaline-filled shooter that's out of this Galaxy, and gives players freedom to take full advantage of the evolution of player to machine interfaces that only virtual reality can offer."

Space Junkies runs on Ubisoft's internal VR engine, Brigitte, which allows creators to work in a virtual reality environment and make changes on the fly. GameSpot was shown a trailer for Space Junkies, but it doesn't appear to be online yet. We'll add it here if and when it becomes available.

Space Junkies was just one of the many announcement Ubisoft made today at E3; it also revealed another VR game and unveiled Beyond Good & Evil 2. Check out GameSpot's roundup of all the big news to catch up. 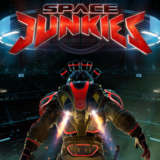