The free-to-play card game is coming to mobile devices.

Bethesda is bringing the free-to-play card game Elder Scrolls Legends to iPhone and Android phones, the publisher announced during its E3 press conference today. Additionally, Bethesda revealed that a new Skyrim expansion is coming to the title this June.

The Heroes of Skyrim update is launching on June 29. The expansion adds 150 new cards to the game that introduce new mechanics like Shouts and plenty of dragons. Familiar heroes from Skyrim are also making a comeback, including Aela the Huntress, J'Zargo, and Delphine. You can find details more about the Heroes of Skyrim expansion on the Elder Scrolls Legends website.

Bethesda also confirmed that other new content like in-game tournaments and a Chaos Arena are coming when the game launches on mobile devices. There will also be Dark Brotherhood story content.

Elder Scrolls Legends is already available on PC, iPad, and Android tablets. The game was recently updated with two new modes: Spectator, which lets you watch games that are being played by your friends; and Gauntlet, a global tournament in which players compete for spots on worldwide leaderboards.

In other Skyrim-related news, the Nintendo Switch version was also showcased during today's press conference. Along with new motion controls, the game is compatible with Amiibo figures from the Legend of Zelda: Breath of the Wild line. Tapping a Link Amiibo will give your character Zelda gear such as a Champion's Tunic and Master Sword. 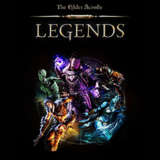