After more than 15 years since its initial PC release, adventure classic Grim Fandango is finally making a return, with the game confirmed for a return to the PlayStation 4 and the PlayStation Vita.

The remastered Grim Fandango was confirmed during today’s Sony PlayStation E3 2014 press conference. The game, which was initially released in 1998, was one of the last great adventure games, and follows the story of Manny Calavera as he sets out to solve a major mystery in the Land of the Dead.

No release dates were confirmed. 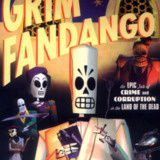