Nintendo's trusty pink puffball is making its return on the Nintendo Wii U next year in Kirby and the Rainbow Curse. In a brief trailer shown during Nintendo's E3 2014 press conference, Rainbow Curse will be immediately recognizable to fans of 2005's Kirby: Canvas Curse on the DS.

In Canvas Curse, players did not control Kirby directly. Instead, they used the stylus to draw paths for Kirby to follow, or to tap Kirby to have him dash a short distance. These paths bridge gaps in the level, or shield Kirby from harm. And it appears that Rainbow Curse will play in much the same way. A similar, path-drawing mechanic was shown in the trailer, as well as a new art style. Unlike Canvas Curse, which had a more cartoonish aesthetic, Rainbow Curse sported a distinct claymation-inspired art style.

In his review, GameSpot alum Jeff Gerstmann praised Canvas Curse, stating that "Canvas Curse couldn't really be done on any other platform, yet it doesn't sacrifice its gameplay for the sake of short-lived gimmicks." It will be interesting to see how Rainbow Curse builds upon this foundation, as well as how it handles the transition from the DS handheld to the Wii U's touchscreen. 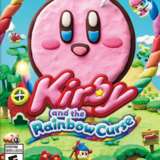 Kirby and the Rainbow Curse
Follow
$57.96 on Walmart
Buy