E3 2014: Happy Wars Coming to Xbox One With Cross-Platform Support on Xbox 360 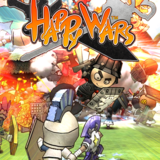