Defence of the casuals.

Let me preface this preview by saying that I'm not much of a multiplayer online battle arena guy. When heroes clash in Dota 2 and League of Legends, I usually cannot tell what is happening on the screen. It looks like an explosion of colours and particle effects--then suddenly, three characters are dead. I can't make strategic decisions if I can't understand what's going on. Arena of Fate, Crytek's new take on the MOBA genre, seems like it's designed for me. This is a MOBA that strips the core mechanics back to their basics, removing layers of complexity and ensuring visual feedback is immediately readable.

It's a simpler MOBA, for simpler people--the kind who can't commit to matches that can last an hour.

It's a simpler MOBA, for simpler people--the kind who can't commit to matches that can last an hour. To that end, every match in Arena of Fate is bound by a 20-minute time limit. It's a refreshingly short time span for a single MOBA match, and will hopefully alleviate much of the anger that brews amongst the player base when they're unable to surrender a long match that they know they'll inevitably lose.

With a shorter time limit, Crytek is making a conscious effort to get you into player-versus-player conflict as quickly as possible. You won't spend time farming creeps or carefully levelling up--the smaller map design promotes an immediate clashing of heroes. You don't have to worry about stealing the experience points by being the last player to land a killing blow, either--kill XP is shared amongst the team in an area around the killer.

The teams of five against five select their heroes from the realms of folklore and fiction. I played as Alice, who spoke in verses from Alice in Wonderland, and threw mad hats, summoned white rabbits strapped to dynamite, and spawned playing card soldiers to block lanes. Other characters participating in my hands-on match included Sherlock Holmes, Robin Hood, Van Helsing, Jesse James, and Blackbeard.

One key change to the MOBA formula that promotes faster play is that you don't need to return to a vendor to buy items in Arena of Fate. Instead, you select a blank slot on the skill bar and choose what you want to purchase--after a few seconds, it's ready to use. This is a part of Crytek's conscious effort to cut out the downtime in a typical MOBA match--the developer wants you clashing with players as much as possible, because this is by far the most exciting aspect of the genre.

Arena of Fate still conforms to the MOBA genre's typical victory condition--destroy the opposing team's main base--but adds a new one based on points. The team with the most points at the end of the 20 minutes will win, regardless of whether their opposition's base goes down. Points are earned for destroying defensive towers along each lane, by killing large neutral creatures at the center of the map, or by accruing player kills. The result is a MOBA that commits completely to its 20-minute time limit, resulting in a simpler, more accessible, and more readable game for those who might be intimidated by the genre. In case I didn't labour the point, that such person is me. 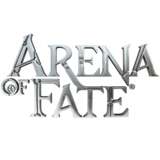