We're on the highway to bullet-hell with Q Games' latest retro-styled shooter.

Our hands-on with SideScroller began on a level called Volcano. Multiple layers of orange vector graphics made up scenery of rocky outposts and tunnels to navigate. We couldn't admire our surroundings for too long, however, because we were soon attacked by a group of wormlike enemies. As they wriggled across the screen, they started firing streams of red bullets at us that we tried our best to dodge. Of course, we started to fire back. Our ship was equipped with three different weapons: a rapid fire gun, a laser, and homing missiles. In typical shoot-'em-up style, we went for the rapid-fire gun and began launching our own stream of bullets to destroy our attackers.

Further into the level, through some winding tunnels, we encountered another group of enemies that was stuck to the walls. Some looked like mechanical turrets, while others resembled small plants, but all of them were hell-bent on destroying us. It's here that we learned of a cool feature of our ship. A short press of L1 made it spin, which briefly shielded us from enemy fire. By using a combination of spins and attacking fire, we were able to fend off multiple enemies with ease. Each time an enemy was destroyed, it left debris behind shaped like small plus symbols, which we could collect for bonus points. Using spin sucked in debris from around the ship, allowing us to capture it quickly and over a larger area.

Spin also had another function. In a later section, we were locked into a box-shaped room with three larger enemies. By holding down L1, we could charge up the spin, eventually releasing the energy and charging toward our attacker at great speed. This was great for zipping through large streams of bullets quickly, which made it much easier to launch a counterattack. Our other weapons were useful too. Both the laser and homing missiles launched at a slower rate than the rapid-fire gun, but they were much more powerful. The homing missiles were especially useful when under heavy fire because we could easily dodge bullets without having to think about aiming.

When we were hit, though, our ship didn't blow up straight away. A damage bar at the bottom of screen filled up with each hit, which when full caused our ship to disintegrate into a mess of neon debris. Most of our dying took place on the boss level, where we faced off against a beaked creature with multiple eyes and a set of rocket launchers on its back. Several areas of its body were colored red, signifying where to shoot. At times, a smaller creature would jump out of its mouth and attack our ship, all while massive streams of bullets were heading toward us. The battle was tricky, requiring some steady nerves, fast reactions, and a lot of patience.

Though it was all typical shoot-'em-up fodder, SideScroller's visuals were certainly not. The vector-graphic art style looked like a cross between the simplistic line drawings of the classic Asteroid and the over-the-top neon light show of Geometry Wars. There was also a neat CRT overlay applied to the screen, which curved the edges of the image and added scan lines--just like in arcades of old. PixelJunk SideScroller is due for release this summer on the PlayStation Network. Head over to our E3 page for more from this year's show. 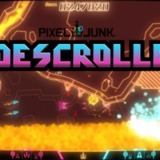