We revisit Metal Gear Solid: Peace Walker--this time, in high definition and on the Xbox 360.

Just ahead of E3, Konami announced Metal Gear Solid HD Collection: a bundle of high-definition remasters of Metal Gear Solids 2 and 3 and last year's PSP title Metal Gear Solid: Peace Walker, due for release on both the PlayStation 3 and Xbox 360 in November. We sampled the Xbox 360 version of Peace Walker on the E3 2011 show floor, looking for how this HD reworking stacks up against the rather good PSP original.

The E3 demo took us to a mission we recognised from early in the PSP game. The maps and objectives appeared to be the same as those in the original game: track down Amanda, leader of the Sandinista rebel group, by stealthing (or otherwise) through a network of bite-sized, guard-patrolled areas in the Costa Rican jungle. The high-definition visuals are the biggest difference, of course. Though the handheld original version was far from ugly, the remake's 1080p picture is easier on the eyes; textures have greater detail, and character models appear less blocky. Shorter loading times in the transitions between one area and the next are another benefit of Peace Walker coming to more powerful platforms.

Peace Walker's controls benefit from the second analog stick on the Xbox 360 controller (or on the PS3 controller). You use the right stick to control the camera now, rather than the face buttons on the right-hand side of the PSP, which feels much less fiddly. Other controls are less impressive. It seems awkward that the right and left triggers are both given over to opening the item menu window, while aiming is mapped to the left bumper and shooting to the right bumper--shooting with the right trigger would have surely felt more natural.

For those who sunk hours into playing and replaying Peace Walker's missions on the PSP, growing and honing their private army, Peace Walker HD Edition has a treat in store in the shape of "transfarring," the awkwardly named means by which you will be able to continue your game on both the PS3 and PSP. Transfarring, a kind of cross-platform save transfer, will let you take your progress on the PS3 version and then shift it onto the PSP version for portable play.

Though it's not present in the E3 demo, Peace Walker's multiplayer cooperative action will also make the transition from the handheld to the home console version. We'll have more on that when we get our hands on it and on Peace Walker HD Edition generally in due course, ahead of the Metal Gear Solid HD Collection's launch in November. 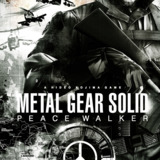