LOS ANGELES--Microsoft has been doling out information on some of Xbox Live's upcoming highlights for the remainder of the year throughout E3 week. On Monday, that effort took the form of a full reveal for this year's Summer of Arcade lineup, with the first of five games expected to go live July 20.

Today, Microsoft announced Hole in the Wall, a Kinect-enabled take on the TV game show, will also arrive this year. In the game show, versions of which have been redone in the US, Japan, and other countries, contestants attempt to contort their bodies to conform to an on-rushing wall. If they succeed, the wall passes harmlessly by. If they fail, the wall pushes contestants off into a waiting pool of water.

Microsoft's version of the game will play out much the same, sans dunk tank. Using Kinect, up to four players can compete to quickly mimic on-rushing open spaces. The game also includes a Survival mode, where players engage in a continuous stream of on-rushing walls to see how many they can pass through successfully.

Microsoft did not reveal pricing information for Hole in the Wall. 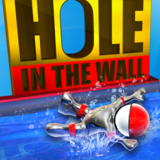 View Comments (18)
Hole in the Wall