DUST 514 will be an unusual PS3-exclusive shooter with ties to EVE Online. We sit down with representatives of CCP to discuss the game at E3 2011.

E3 2011 is the place for exciting game news, and one of the more unusual stories of the show is that of DUST 514. This massively multiplayer shooter has been confirmed as a PlayStation 3 exclusive, but aside from using the PlayStation Network as a distribution platform (the game will not be carried at retail and will instead be downloadable over Sony's online service) and as a gateway to log into the game, CCP plans to host the game on its own servers. This makes sense, considering its tight connection to EVE Online, CCP's massively multiplayer game for the PC that launched in 2003 and has been quietly growing its player base since then. The CCP representatives did suggest that they felt that the PS3 was the superior platform for a game of this sort because it offers "better visual fidelity" and offers connectivity options both with the PlayStation Move--which the studio expects to implement both for shooter gameplay and for navigating EVE-style star maps--and with Sony's recently unveiled handheld, Vita.

The studio's representatives claimed the company has "definite plans" for Vita functionality, including but not limited to how EVE players already access in-game economy information outside of that game. The developers also confirmed DUST 514's pricing and update schedule. DUST 514 will be sold on the PSN with a one-time "admission fee" that will include access to the game and a fistful of in-game credits to get your mercenary character started. Afterward, the game will share an update schedule "in the same cadence as EVE's," meaning that all subsequent content expansions will be free of charge and made available every few months.

Otherwise, DUST 514 will be as tightly integrated into EVE Online as possible. In fact, mercenary characters may both work for EVE player corporations and join them as full-on members. CCP doesn't expect too much disruption in the lives of EVE players who also start playing DUST because battles in the console shooter may take up to 30 to 40 minutes, while EVE's fleet battles will continue to take up to six hours or more. Both games will be hosted on the same server infrastructure and take place on the same "shard." This is the same virtual universe, so there won't be any issues with you and your buddies ending up on a different server.

Interestingly, CCP's target audience for this game isn't just EVE players. The studio suggests its primary target is console shooter fans who will hopefully be won over by the game's persistent MMO-style character progression (which, like EVE, will have no preset classes and instead be based on an open-ended skill system that specializes in the use of certain modules, items, or weapons) and by the ability to affect events in the larger EVE universe. Mercenary companies in DUST will go on missions to capture resource platforms and other key locations planetside. And while their primary reward for these missions will be the credits offered by corporations for these missions (which they can then spend on blueprints that can be converted to better weapons and armor or sold on the secondary market), over time, as players develop loyalties to one corporation or another, they may find themselves fighting alongside their corporation for dominion of the universe. In addition, EVE players will also gain access to a limited number of weapon and armor recipes for DUST players, though the specifics of these blueprints and details about how players will be able to further upgrade their equipment have yet to be revealed.

As an online console shooter, DUST 514 is entering an extremely competitive space, but the game sets itself apart with persistent character development and unique ties to EVE Online. The game will launch next year on the PlayStation Network. 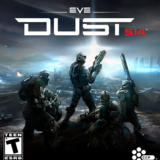