We see a hand-drawn fight in crystal-clear motion in the PS Vita version of the cult hit fighter.

Who's Making It: Arc System Works will be handling the port of the game.

What It Looks Like: BlazBlue's hand-drawn animation looks really good on the PS Vita. It's hard to tell much downsizing has been done from the arcade version's native resolution of 1366x768, but everything looked sharp and hi-res to the naked eye on the OLED screen. It's also running on full 60 frames per second.

What You Do: Players duke it out amongst themselves in one-on-one high-flying and combo-heavy combat. Since this game is based on the latest iteration of Continuum Shift, the game will have all 19 characters, ranging from main character Ragna the Bloodedge to recent fighters like Makoto Nanaya. New additions to this port include six major additions to the game's story mode, while existing additions from past ports on the PSP and 3DS are Legion and Abyss modes. The game will also have online play for two to six players.

How It Plays: If you've played a 2D fighting game on the PSP, you'll be fine pulling off moves on the PlayStation Vita's control layout. We pulled off Ragna's moves just fine using the PlayStation Vita's D pad, face buttons, and left analog stick. We were told that this version will have touch-screen and rear touchpad controls, presumably for pulling off special moves and combos on the fly.

What We Say: While this version doesn't seem to add much apart from touch-screen controls, it is quite a revelation to see a near-perfect version of the latest BlazBlue game on a portable system. There is no confirmed release date for this game at this point in time. 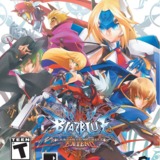