We checked out Battle March, the upcoming action RTS for the 360 at Namco Bandai's E3 booth.

Warhammer has made a natural progression from table-based to console-based games over the years. The company's latest, upcoming action real-time strategy game for the Xbox 360 is based on the PC's Mark of Chaos, and we popped in to Namco Bandai's E3 booth to see it in action.

The Xbox 360 version of the game includes the original Warhammer: Mark of Chaos, in addition to the new Battle March expansion pack. As well as a single-player campaign and skirmish modes, there is online multiplayer support for two to four players on the Xbox 360 (down from six on the PC version). Since we last saw the game, Namco has added an extra faction, bringing the total to six, although only three of them are playable: Empire, Chaos, and Orcs & Goblins.

Hero units will play an important emphasis in Battle March, in that they'll not only help your team's morale but will also perform magic attacks. However, watch out, because losing a hero will be an immense loss to your army. Once a hero dies in battle, it might not be impossible to complete a mission, but it sure will be an uphill battle.

In addition to the regular factions, you'll be able to create custom armies. Although they're based on the existing factions, you'll be able to customise colours and banners for your custom fighting force if you so desire. Given that soldiers are randomly generated with a wide combination of options (including their individual uniform, body, and facial type, as well as headdress), making a custom army will take your side's unique look to the next level.

We're happy to report that Battle March looks quite promising visually, with richly detailed humans, orcs, and other creatures, vivid environments and terrain, and plenty of good effects on explosions and flames, which you'll no doubt be seeing a lot of through the course of the game.

Warhammer: Battle March should have something to offer both hardcore Warhammer and casual RTS fans alike when it arrives this September. GameSpot will bring you more coverage of Battle March as it nears completion. 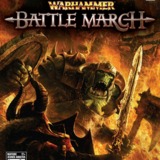