Although bleak and highly radioactive, the future is bright in this anticipated shooter from Deep Silver.

After suffering through an excruciating demo of S.T.A.L.K.E.R.: Clear Sky earlier this year, we finally got our hands on this interesting prequel from Deep Silver. Don't get us wrong: The earlier demo showed off a beautifully rendered radioactive landscape and interesting dynamic storytelling involving the game's many factions and non-playable characters. Unfortunately, Deep Silver refused to let us play for ourselves, despite our begging and pleading. That all changed Thursday at E3 2008 in Los Angeles.

We jumped into the role of Scar, the protagonist in Clear Sky. After we entered several cheats, Scar had access to every weapon in the game as well as every radioactive artifact that gives a variety of bonuses. The setting was the city of Limansk, a bombed-out ruin that was ravaged by pockets of radiation. For the first time we saw one of the few puzzles in Clear Sky. On one road, irradiated areas were made visible by a shimmering effect, similar to heat rising above asphalt. Scar was forced to avoid these pockets of radiation by ducking and shimmying around them or else be transported to the beginning of the street to do it all over again.

There are several factions in the Clear Sky universe, and allying yourself with one (or more) will open up squad support during hairy missions. On a dark street, Scar stumbled upon a renegade, and our squad held him at gunpoint. The rogue said he had information that would be valuable on the road ahead, and he would gladly give it in exchange for a medkit. Since our faction isn't one to give in to such demands, this rogue was unceremoniously gunned down in the street. There are plenty of choices like this in Clear Sky, and deciding who lives or dies will alter your story experience in this dynamic world. Besides, the renegade's information wouldn't have mattered since Scar was under the protection of god mode.

Up ahead, a friendly soldier was pinned down by enemy machine gun fire. He offered to lay down some covering fire so Scar could escape into a nearby house and attempt to flank the gunner. Of course, you can choose to go wherever you want, ignoring the ally if you like. We played along and fought through the house and took out a few guards while he attempted to suppress the gunner. With a well-timed shot of a sniper rifle, the gunner was eliminated.

That ended our hands-on time, although we did scroll through the inventory screen to check out some of the weapons available. There are standard machine guns, shotguns, and rifles, as well as a bazooka and a six-pack grenade launcher. Each has its own individual ratings and attributes and can also be modified with items you pick up in the Chernobyl exclusion zone.

One of Scar's major goals is to track down the irradiated artifacts that litter the zone. Some are nothing more than pieces of rock, while others offer tremendous bonuses. The flame artifact, for example, reduced bleeding by 60,000 percent, meaning that your wounds will heal almost instantly. Almost all of the artifacts emit poisonous radiation, although it's unclear how that will inhibit your character during gameplay. Thankfully, most radiation-related illnesses are treated in Clear Sky with vodka, which flows like wine in the exclusion zone. If you're in need of some cold, hard rubles, you can sell artifacts to many of the local merchants.

The inventory system is interesting in itself in that it is based on weight. Scar is able to hold 50 kilograms' worth of whatever he wants, and he won't be able to move if the inventory is overweight. With every weapon in the game, Scar easily topped out at 346 kilograms, but another handy cheat allowed him to move forward and eliminate enemies with explosive grenades.

S.T.A.L.K.E.R.: Clear Sky is on our shortlist of anticipated upcoming PC titles for its blend of first-person shooting and role-playing elements, combined with a rich atmosphere and storytelling. We'll have more on Clear Sky soon. 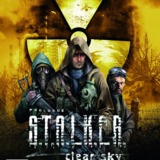