Only in Natsume's latest rhythm game are there six princes for every girl.

18 Comments
Natsume is all about the adorable characters, and there definitely isn't a lack of cuteness when it comes to Princess Debut, where you play as a girl who has 30 days to win over a prince so that she may ask him to the ball. The game is primarily a ballroom dancing rhythm game, but mixed in between is a bit of story and a bit of flirting so that in the end, you have a date. There is a map where you may travel between your home, practice halls, and different beautiful locations if there happens to be an event going on. There are six princes with a hidden prince, but what's more important are the outfits and the accessories. Each time you practice, you can doll up your dancer in lovely dresses and jewelry. There are Harvest Moon-like elements to the game; for example, when you're up late dancing, the game will let you know when you need a break and will tell you to go to bed. You will also need to spend time socializing to woo your favorite prince. Each prince has his own personality, and you have different responses to choose from when you're having a conversation. There was one prince who left in a huff because we refused to dance with him. Too bad. The only dance we got to perform was the waltz, and we danced with a rabbit in a tuxedo. The dance moves have been motion-captured, and there are 18 styles of dance including Latin, tango, and ballroom. On the bottom touch screen, you follow the directions, which involve following a circle as it moves in a semicircle from left to right and right to left. Sometimes you'll need to draw a full circle, and it calculates your score based on your timing and how well you stay within the lines. The top screen shows your performance, and in the left corner it shows what steps are coming up next. There are also minigames scattered throughout. We didn't get to see one work properly in this early build, but to give you an idea, it was called "He loves me," and it involved flower petals. You can also take photos during your practice sessions, and there is a photo gallery that you can access that keeps track of all your pictures. There is a music mode that we didn't see, which has all the different dances motion-captured so that if you're interested, you can also learn the steps. There will be roughly 25 hours of gameplay depending on how much time you take to explore and socialize. It's a fun and very girly portable game for those of us who are princesses on the inside. Princess Debut is expected to ship this fall on the DS. 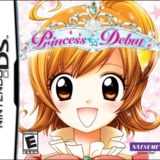