Microsoft has revamped the Xbox 360. Check out what's going to change!

Microsoft's not content. Despite ostensibly having one of the best user interfaces of all the major consoles, Microsoft is reinventing the Xbox 360's look. The underlying Xbox Live foundation will remain the same, but Microsoft wants to make life even better for users by making existing features easier to find and use, decluttering the marketplace, and vastly improving the social experience of Live.

Users who are familiar with the traditional five-bladed menu structures will be relieved to find that the old system remains intact--they appear whenever you press the Guide button on the gamepad. Pressing the button pops up a miniature version of the original blade system. The new miniblades will be accessible anywhere, even while in a game.

Microsoft is banking heavily on its new Primetime feature, a brand-new area that gives users a whole new way to play games together. Virtual gameshows are the name of the game here. Microsoft has already demonstrated 1 vs. 100, a game of mental king of the hill against a hundred other opponents. Microsoft will introduce other gameshow-related games to Primetime. Some events will even feature live hosts and offer prizes to keep the gameshow charm. Primetime will let you either participate in the action as a competitor or play along silently as a spectator.

Microsoft has partnered with a number of content providers to provide thousands of hours of additional content in the Xbox Live video section.

Microsoft announced at E3 2008 that content from Netflix will be viewable via Xbox Live for Xbox Live Gold members. The deal allows users who subscribe to Netflix to watch movies and TV shows saved in their Netflix Instant Queue on their Xbox 360. You will have to visit the Netflix Web site to add or remove titles from your Instant Queue. Any Instant Queue adjustments you make through the Web browser will automatically update on the Xbox 360 within seconds.

Netflix currently offers more than 10,000 movies and TV shows available for instant viewing. Video playback will stream at near DVD quality, and users will also be able to rate movies they've watched via Xbox Live.

Content from companies such as NBC Universal, Universal Studios Home Entertainment, SCI FI Channel, USA Network, Constantin, and MGM will also populate the video marketplace. Videos will be available for purchase in either standard definition or high definition. 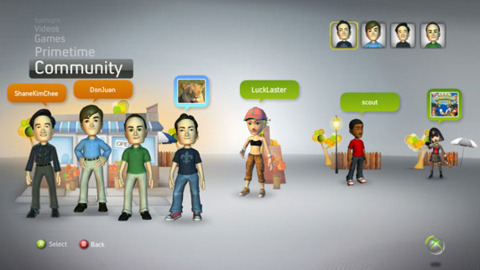 Microsoft added a community channel to make socializing easier. The new channel lets you quickly find your friends, see what they're doing, and then make it easy to join in on the action. New community features will let you gather into parties and find new activities to do together. LiveParty allows up to eight users to band together with shared voice and text chat. Everyone in the group shares the same communication channels while playing games, watching movies, or participating in other events. If some users switch to a game that others in the party don't own, the group will still stay in communication with one another in the LiveParty.

The MyXbox section will give you a central location to edit personal items. From here you'll be able to add pictures, edit your profile, and view your achievements. Microsoft will also institute a new medal system so you can show off your most recent achievements. Medals are basically graphical representations of achievements, kind of like graphical badges or trophies.

Microsoft also decided to get into the personalization fray with user avatars. Much like how you can create Miis on the Nintendo Wii and user avatars in Sony's PlayStation Home, 360 users will be able to create virtual representations of themselves in Xbox Live. The MyXbox channel will let you customize your avatar's body, hair, and clothing style. Currently all avatar graphics are being designed by Microsoft's Rare Ltd. studio. Microsoft indicated that many aspects of avatars will remain free, but upcoming content might include premium content for options such as clothing.

In addition to simply looking pretty and providing an avenue for user expression, avatars will also be usable in upcoming games. Microsoft indicated that many third-party developers are excited at the prospect and are eagerly adopting the new feature. Future game achievements may also unlock upgrades such as new outfits for your avatar.

The Spotlight channel serves as a simple way to access what is essentially the most popular or important stuff on Xbox Live. The channel will have links to the hottest games, events, videos, and whatever else Microsoft wants to put in front of you. The system will be updated frequently to help users discover new and interesting content.

One of the not-so-cosmetic changes in the fall update will be the ability to let you play your games directly from the hard disk. The new feature will let users install all of the game content directly onto the hard drive to improve game load times. Microsoft reports that it has seen a 30 percent improvement in load times in internal testing. As an interesting data point, Microsoft went out of its way to tell a group of reporters that the full Devil May Cry 4 hard disk installation took roughly 10 minutes on the Xbox 360. The installation took twice as long when we conducted our own installation tests on the PlayStation 3. Another side benefit of having games installed on the hard disk is reduced noise, since the optical disc no longer needs to spin up. However, you will still need to have the game disc in your optical drive while you're playing it, presumably as a piracy check.

The new Xbox experience is certainly turning out to be a colossal achievement. The update could easily qualify as a new software product with the number of features and improvements it brings to the Xbox 360. We look forward to testing out all the new upgrades when Microsoft rolls out the update this fall.