New information seemed to ooze out of every word uttered by presenters today at Microsoft's E3 Media & Business Summit. One of the biggest reveals, though, concerned the long-rumored Xbox Live interface revamp. When the Xbox Live redux goes live this fall, it will bring a completely new look to the online platform, as well as an avatar-based community system and integration with Netflix's on-demand movie download service.

Significant happenings one and all, but those aren't the only changes Microsoft is slotting in for its fall update. In an open letter posted to Larry "Major Nelson" Hryb's company blog, Xbox Live general manager Marc Whitten ran down a number of other updates planned to be rolled out for the service in the near future.

Taking a play from Sony's book, Microsoft today introduced "Play From Hard Drive." The optional feature will quickly put Microsoft's new 60GB Xbox 360 to use, letting gamers install all games--whether already out or coming soon--to their hard drives. According to Microsoft, the install will both decrease load times and dampen noise by eliminating the need for the disc drive to spin a disc.

Microsoft will also be strengthening ties with its PC platform by opening up Xbox Live Marketplace for access through the PC. Xbox Live members will be able to browse through and buy Marketplace goods through Xbox.com, and purchased content will then be downloaded automatically.

Whitten also elaborated on a few of the key points of Microsoft's press conference. Addressing the avatar system, Whitten said that players will be able to form parties of up to eight to jump from game to game as well as view Netflix films, share photos, and chat through the Xbox Live dashboard. This community approach will also extend to Xbox Live Primetime, a casual-game portal that features gameshow-like events and contests. The publisher noted that a live host will be on hand for many of the events. 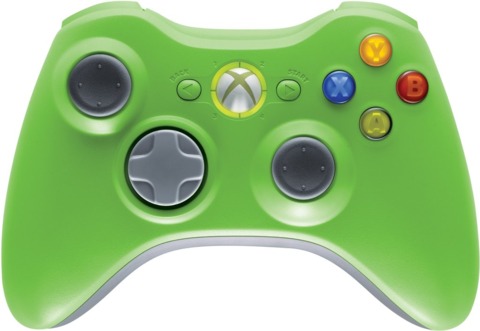 Those concerned with the hardware itself have two new features to look forward to. On the display side, Whitten said that Microsoft would be adding 16X10 aspect ratio over both VGA and HDMI, as well as implementing 1440x900 and 1680x1050 display resolutions. The game maker also debuted a pair of festively themed controllers. One green and one red, the wireless controllers will come bundled with a Play & Charge battery kit and will be available for $64.99 each on or about September 30.