We check out a one-circuit demo of Capcom's upcoming motorcycle racer.

Earlier today, during a behind-closed-doors meeting with Capcom at the Los Angeles Convention Center, we had the opportunity to get our hands on an Xbox 360 demo version of MotoGP 08. The demo featured a full field of licensed riders but only one of the 18 circuits that will appear in the finished game: Barcelona's Catalunya.

We were told that although the visuals in the demo were essentially the same as those in last year's game, they'll definitely be getting an upgrade before the game arrives in stores. The reason the demo was being in shown in spite of this is that Capcom wanted to show the game's new Arcade mode, which makes the handling of the bikes and the AI of the opponents much more forgiving.

Sure enough, we managed to complete a three-lap race without ever looking like we were in danger of falling off our bike, though it's worth noting that the same can't be said for one or two of our opponents and that falling off is still possible. We didn't ride a perfect race by any means, but errors that saw us riding onto the grass weren't punished with anything other than a drop in speed. With that said, the Arcade mode isn't so forgiving that you can powerslide around corners or anything like that, so you still need to brake early if you want to get around ahead of the competition.

MotoGP 08 will feature a 125, 250, and 1,000cc racing series. It is slated for release on Xbox 360, PlayStation 3, PC, Wii, and PlayStation 2 later this year. We look forward to bringing you more information on the game as soon as it becomes available. 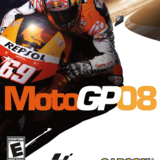