We got to sing in front of the virtual judges in the upcoming American Idol game from Konami.

19 Comments
People can't seem to get enough of American Idol, so Konami is back with Karaoke Revolution Presents: American Idol Encore 2. Like the previous singing games, not too much has changed except that there are more venues, new songs, and the three judges: Paula, Simon, and Randy are back with more commentary. We went through the song list, sang a duet, and found that the formula remains unchanged, which isn't necessarily a bad thing because there really isn't much to work with when it comes to a singing game. There is still a Quickplay mode for those who just want to sing a song and be done with it. American Idol Competition mode will send you through the auditions as you try to sing your way to the top. You can croon with a partner in Duet mode or battle against him or her for the best score. There is a karaoke option where the song will play and no score will be recorded; you just sing like you would at a karaoke bar, minus the heckling from the audience. We were told that there will be about 40 songs when the game ships with 11 or 12 venues. They will also offer downloadable content, aiming to release four to five songs every two weeks. We only had access to a short list, but we saw a mix of songs from the '80s, as well as some rock, R&B, and ballads. A few examples include "Maneater," "Eye of the Tiger," "Maggie May," "Wait for You," and "Enjoy the Silence." Visually, the graphics are much sharper now and the interface is incredibly easy to navigate through. If you really enjoy being criticized by the judges, then American Idol Encore 2 is a great way to get your American Idol fix. The game is set to be released this winter and will be on available on the Wii, PlayStation 3, and Xbox 360. 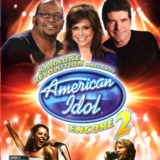