We try not to kill too many sheep in Capcom's upcoming puzzle platformer.

While many publishers are still trying to figure out how best to pursue the digital download market, Capcom has been doing just fine for itself with a recipe book that calls for rereleases of beloved classics sprinkled with the occasional brand-new title. We recently got a chance to check out a game residing in the latter category, a newly announced puzzle platformer known as Flock. Scheduled for release this holiday season on Xbox Live Arcade, the PlayStation Network, and the PC, Flock puts you in the cockpit of a UFO as you try to wrangle up various farm animals in levels with increasingly bizarre and humorous obstacles.

In each of Flock's levels, you're given a quota of farm animals that you need to safely guide from one area of the map back to your alien base for safe abduction. In terms of mechanics, guiding these animals is simple. Flock seems to be taking a similar approach to Capcom's recently released light-strategy game Plunder, with a control scheme light on excessive button-pressing and heavy on contextual, automated interactions with the environment. Your UFO has three functions: scare, push, and pull. You scare farm animals along simply by hovering over them. They'll automatically flee from you in terror, but it's up to you to keep nudging them along in the proper direction. If you encounter tall grass, you might need to push it down with an energy beam to clear a path for your animals. But more often, you'll need to pick up certain objects with your tractor beam to clear away obstacles from your animal's path. The trick is that you can't simply pick up your animals with the UFO. We learned the hard way that they can and will burst like a piñata.

You'll guide four types of animals: sheep, chickens, cows, and pigs. Besides the varying sizes of each animal, they interact differently with the environmental obstacles you encounter. Sheep will get stuck in tall grass, so you'll need to use your UFO beam to clear a path for them. Cows, on the other hand, will trample through grass and plow through fences. Pigs are so fat that they roll around like balls, but it's best to steer clear of manure piles because they're attracted to the smell of poop. Chickens can fly over gaps in the levels, but they'll also fly right off a cliff into the water if you're not careful. Each type of animal has its benefits and drawbacks.

Besides the tall grass we mentioned earlier, you'll notice several other reasons for concern. The most obvious of all is water: Each level is an island, so you need to be constantly aware of how close your flock is to the edge of a cliff, lest you want to see your quota sink to the bottom of the sea. Other obstacles include scarecrows that will send your sheep fleeing in scattered directions, geysers that will shoot your animals into the air, trees and fences blocking your path, and piranhas lurking in the water poised and ready to snatch any animals walking too close to the edge of a cliff.

Certain areas of the ground behave differently. One of our favorites we got to test out was the jump pad. With these you guide your flock onto a specially designated section of the ground, then hover over to a nearby switch. Pressing down on it with your UFO beam will activate an underground mechanism that sends your flock launching skyward over a nearby gap in the terrain, saving you the trouble of guiding them manually. Another special part of the ground is the mating pad. When you push an adult male and an adult female animal onto these sections, you'll begin to hear romantic music as hearts flood the screen. When the screen clears a moment later, that loving couple becomes the proud parents of a handful of calves, lamb, chicks, or what have you. Besides being hilarious to watch, these mating sessions help restore the number of available animals to fill your quota in the event you lose a few too many to the hazards of the level.

Flock has the potential to be a fun puzzle game, with simple controls and a clever sense of humor that should help lure in casual fans. But what might appeal to the more dedicated crowd is the level creator. With this you can design your own puzzles--place obstacles, adjust the terrain, set a quota, and so on--and then go online to share them with others. We didn't get to fool around with the puzzle creator very much, but our brief glimpse suggested a lot of options to choose from.

Flock is scheduled to arrive toward the end of this year. You can expect to see it arrive on Xbox Live Arcade, PlayStation Network, and PC. 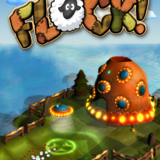