We take a trip on the dark side with Sega's ebon antihero in his upcoming solo adventure.

We've been curious to see just what Sega has up its sleeve with the upcoming Shadow the Hedgehog, which gives the brooding one a platforming showcase. The game serves up an original story that catches the spiky-coiffed hog after the events seen at the end of Sonic Adventure 2. For those who missed the drama-filled finale of that game, Shadow set out for parts unknown in an escape pod once Sonic showed him the business. Shadow the Hedgehog finds the moody hero landing on a mysterious planet roughly 50 years after we last saw him. Toss in some amnesia, an evil dictator who's oppressing the planet's residents, a hefty dose of high-speed gameplay that tries some new things, and you have the perfect setup for a new platformer. We tried out a work-in-progress version on display in Sega's booth to get a taste of what to expect from this new branch of the Sonic family tree.

As we mentioned, Shadow the Hedgehog's story takes place long after Sonic Adventure 2's finale. The amnesiac hog finds himself in the midst of a hefty amount of upheaval on an alien world. But rather than follow the expected, earnest path of a platform hero, Shadow's adventure will be a subjective outing driven by your choices. Your core goal is to gather a shiny set of chaos emeralds that are strewn throughout the world. You'll quickly find that in addition to all the properties we've seen the chaos emeralds possess in previous Sonic games, the mysterious gems also restore memories. However, how you go about gathering the emeralds is up to you. The game will present you with the option of playing through the adventure on a light or dark path that will affect how your quest both unfolds and yields a unique power to Shadow. Along the way to getting Shadow's memory back, plan on seeing a bunch of familiar faces amid all the new material, including Sonic himself.

The levels we played revealed that Shadow the Hedgehog's gameplay has some fun with the expected Sonic conventions and introduces a number of new twists. Shadow will come packing a core set of moves that should be familiar to anyone who's played one of Sonic's recent 3D adventures. However, Shadow is more than just a cookie-cutter Sonic wannabe. The antihero comes packing a bunch of unique moves. The most controversial of Shadow's moves is his ability to wield a gun. We'll admit to being mortified by the "edgy" move, which doesn't really fit the Sonic formula but does work within the context of the game. In addition, you'll be able to interact with crates by picking them up and throwing them.

The visuals in the game are on par with the previous entries in the Sonic series, although Shadow uses an all-new graphics engine made especially for his debut. The areas we tried showcased themed environments that we've come to expect from a platformer starring a hedgehog. One sent Shadow through a rocky area that mixed speedy runs through loop-the-loops with healthy doses of platforming-jumping. Meanwhile, another area was a typical run through a lush forest with a hefty amount of railsliding.

Based on what we played, Shadow the Hedgehog is a decidedly different type of Sonic style game that's trying a number of interesting things. There appears to be enough familiar material to engage Sonic fans, and the new content looks as though it may not feel like a stale retread of a Sonic game with a fresh coat of paint. We'll be curious to see if all these ingredients end up working well together to serve up an engaging, cohesive package. Shadow the Hedgehog is currently slated to ship this fall on the GameCube, PlayStation 2, and Xbox. 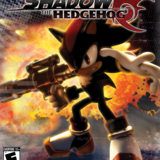