Project Nomads is a single- and multiplayer action game set in the skies--but with strategy and resource management elements.

CDV's Project Nomads won the best PC game award at last year's ECTS, and from the looks of the version present at E3 2002, it's easy to see why. Although steeped in strategy elements, the majority of action takes place in real time, similar to that of space shooters like X-Wing vs. Tie Fighter. The result is a beautiful 3D world populated by lively buildings, hulking aircraft, and scads of miscellaneous environmental visual effects.

The game takes place on a planet entirely composed of midair floating islands. Players battle for control of these islands by using an array of aircraft, gun turrets, and building structures. The production of aircraft and management of energy resources provides Project Nomads its strategy twist, but the ultimate key to success is how you alternate between your own hands-on control of your units. You can pilot an aircraft into enemy territory, but you must also build turrets to shoot down any missiles that may threaten the plane's attack.

The impact of swapping from one unit to the next appears seamless. Head designer Berno Bexreuther enacted the scenario described above during a brief sortie. When he left the biplane to protect it from a Gatling gun placement, the CPU continued on a course that would take it over the appropriate territory. Once the missiles were destroyed, Bexreuther resumed flight of the aircraft and delivered a payload of five bombs to an opponent's navigation tower. According to Bexreuther, "The game has roughly 25 levels, and they all vary. Some have more action, while others require the player to leap from island to island to accomplish a specific goal. As you go deeper into the game, you'll find that you have to be just as skilled in controlling your units as you are in creating them."

In destroying an opponent's structures, you earn artefacts that enable you to build additional buildings and turrets. At the same time, each of the game's three characters has a number of spells that further deepen your options, be they fireballs, lightning, or just protective shields. The three characters--named John, Goliath, and Susie--also vary in overall traits and technology. Goliath's units are well-armored and powerful but slow to react, while Susie makes up for her lack of firepower with an arsenal of spells. John is the consummate middle ground.

The overall formula is rather enjoyable. The creation and placement of turrets resembles that of console role-playing games more than it does PC strategy games, mostly because you build your arsenal from a third-person viewpoint on the island itself. When you're behind the wheel of an aircraft or controlling guns, the game feels like an arcade shooter because of the quick controls and explosive enemy firepower. Only at rare moments, when you're initially launching an island, does Project Nomads feel like a stereotypically slow-placed real-time strategy game.

Graphically, ship models and general texture quality look coarse compared with similar products, but the sheer number of onscreen units and environmental features is astonishing. Wildlife, weather changes, and dynamic debris effects are superfluous to the point of being ridiculous. Day and night cycle during gameplay, a status that enhances the tropical greens and lush waters of the upper islands. The lower levels of the planet are molten and desolate, and the inclusion of dynamic weather is a related bonus. Cloud cover lets friendly vehicles hide from enemy attacks or lay a future ambush, while severe winds and lighting can halt an opponent's advance.

When finished, Project Nomads will feature 20 to 30 single-player missions, as well as the standard array of deathmatch, team deathmatch, and cooperative gameplay modes for up to eight players. Players can also import the islands they build in the single-player mode into the game's multiplayer mode.

Project Nomads will be available for Windows-based PCs this fall, while an Xbox console version is planned for sometime in 2003. 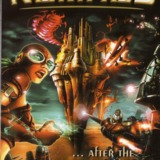