Neocron lets players experience the 28th century via a massively multiplayer role-playing experience that is chock-full of real-time fighting.

A few months ago, we wrote an in-depth and detailed preview of CDV's Neocron. According to the design materials, the game is a combination first-person shooter and role-playing game that will let thousands of players interact, live, and fight amongst one another in a large city--a city full of sewers, buildings, parks, and various winding streets.

Unfortunately, not much of this was evident from the E3 demo.

The most nagging questions levied in GameSpot's initial preview, those pertaining to the size and stability of Neocron's expansive cityscape, were left unanswered. The city was simply unavailable in the E3 version. On the other hand, CDV producer Martin Loehlein was more than happy to show off the game's dwelling, underground, and sewer levels. All of these locations were crisp in detail and offered a glimpse into a world that is defined by futuristic metallic hues and dank areas. "Like in the movie Blade Runner, you'll be able to take flying taxis for transport and challenge other players to duels in darker areas of the city," said Loehlein, who was quick to add, "Our game doesn't have many fantasy elements. Whereas many PC games immerse the players in spells, we're aiming for a deeply sci-fi look."

If combat is any indication, Neocron is as far from fantasy and traditional RPGs as you can get. Fighting takes place in the first-person viewpoint, and the available weapons run the gamut of shooter mainstays, such as machine guns, rocket launchers, grenades, and sniper rifles. Mechanical skills let you create custom items and weapons by mixing the requisite parts, while the realistic inability to create all possible items pretty much forces you to align with one or two in-game factions, which ultimately gives you enemies to watch out for as well.

"Our game is also part character skill and part player skill," explained Loehlein. "If you're not a skilled player, you can choose a character who compensates for your deficiencies or you can acquire weapons that improve your ability to aim and shoot." In keeping with this statement, tiny devices called implants give you the opportunity to improve your performance. You will have the chance to not only acquire new weapons, but also augment your accuracy, speed, strength, sight, and intelligence characteristics through the purchase of computerized body implants--which remain hidden from most players, except those who have themselves purchased a scanning implant.

Currently, the frame rate and visual effects aren't on par with today's most lauded shooters, but tiny details such as rocket smoke trails and scurrying mutant rats paint the picture of a product that is deep in style, even if not perfect in clarity.

A larger, more expansive public demonstration version of Neocron is planned for release this summer. It will feature access to the city areas that were altogether off-limits during E3, as well as in-game faction rivalries, deathmatch arenas, and tank combat. 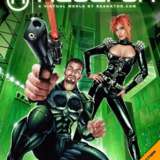