We checked out the first footage of Eidos' upcoming Fear Effect: Inferno.

Eidos had a surprise waiting for visitors to its E3 booth this year, as it was showing a previously unannounced Fear Effect sequel, entitled Fear Effect: Inferno. The movie footage we saw featured Hana, and appeared to take place during certain sections in metropolitan Japan. The footage was almost surreal in its storytelling method. In the beginning of the footage, Hana was dressed as a nurse in what appeared to be an asylum. The patient on the table was struggling against his bonds, and for good reason, as his eyes and mouth were sewn shut. The nurse then stuck the end of a massive tube into the middle of his chest, where green fluid began to pump into his chest. Time seemed to shift forward somewhat, and Hana was in a room, bound in a straightjacket. She was able to slip out of the jacket, and ended up dressed in a hospital gown shirt, where she fled from the room.

The bizarrely non-sequential footage then resumed with Hana sitting on a boat, floating down a river next to an attractive woman, who resembled Rain from the second game. A plate of water handed to Hana erupts into a mass of black boils, and when the plate falls, the screen becomes overcome by flames. Amidst the flames, Hana and Rain are shown side by side, in all their scantily clad, anime-shaded splendor, showing off their shooting animations.

The footage ends with a particularly gruesome sequence, where Hana is racing through the corridors of this asylum, where abusive guards are chasing her. When cornered, she reaches for one of their faces, when the flesh immediately rips off, revealing muscle tissue, and fangs. She is able to escape into an elevator, after being pursued by similar twisted guards, including some with fleshy tentacles in place of arms, and all bearing bloody visages. Still dressed in the gown, Hana slumps to the floor of the elevator, and realizes that the walls of the elevator shaft aren't composed of steel or plaster, but instead some form of pulpy alien flesh. Mortified, Hana is assaulted by tentacles that sprout from the rapidly closing-in walls, at which point the footage ends. 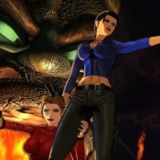