Breed is a first-person shooter with vehicles that's looking to please those seeking an heir apparent to Halo.

Breed is a first-person shooter action game for Windows-based PCs. In Breed, players take command of the entire crew and vehicle complement of the Earth battle cruiser, the USC Darwin. Unlucky for the crew of the Darwin, Earth was invaded by aliens while they were away. Now, they're all that remains of the human race.

The game's developer, Brat Designs, describes it as a multivehicle mission-based FPS. Sitting in orbit, the Darwin serves as a base of operations, from where you can launch dropships to ferry troops and tanks to the surface or scramble fighters to participate in dogfights or exact pinpoint strikes on land-based targets. Although there is some strategy involved, Breed is primarily an action game. Players can control every vehicle and troop they send into battle--including massive tank guns and jeep-mounted machine guns.

Product Manager Martin Loehlein is quick to distance the game from Microsoft's Halo, saying, "Halo has smaller levels and very rigid mission goals, whereas the levels in Breed are huge and offer multiple objectives. Additionally, in Breed, the player and his friends can control nearly all of their armies' units during a battle, while Halo just has a limited number of vehicles."

While Loehlein raises a good point, that Breed offers more diversity than Halo, the similarities are uncanny. The missile, dropship approach, and troop-fighting aspects are similar for both games, while the two-weapon limit for infantry is identical to Microsoft's Halo. Even the helmet and camera overlays pay more than just a passing homage to Microsoft's most popular Xbox game.

Comparable to Halo or not, Breed is CDV's "killer app" for 2002. The game's scenery is breathtaking. Each of the game's 24 stages is set in areas that are desert, mountainous, or jungle in nature, and all of the sunlight flares, blowing leaves, and fiery wrecks you can imagine are present. A few missions bring the battle onto the mothership itself, where players can take up strategic positions in the hallways and corridors of a working spacecraft. "You can also use tanks and jeeps inside the mothership," says Loehlein.

The transition from orbit to atmosphere is seamless, with clouds so wispy you could almost inhale them. On the ground, the typical postapocalypse wastelands and abandoned military bases are enlivened with a number of environmental gimmicks, such as dynamic sunlight, glistening lagoons, and swaying palms. Mixed into the soiree, vehicles move with a weighty presence, while the screen often fills with smoky projectiles, exploding shrapnel, and dust-laden debris. Surprisingly, the frame rate doesn't stutter, and the draw-in distance is far-flung.

One particularly nice scene occurred during the dropship approach, when a human troop unit was sent to the supply doors of the aircraft to provide cover fire for a landing--just like the side gunner would do on a modern Apache helicopter.

The 24 stages within Breed's mission mode support both single- and two-player co-operative gameplay, while its multiplayer mode supports up to 16 simultaneous players on a variety of deathmatch, capture-the-flag, and king-of-the-hill maps. Many vehicles feature multiple gun turrets, which means entire teams can co-operate from within just one or two tanks. By the same token, the list of vehicles and weapons is lengthy: Miniguns, sniper rifles, rocket launchers, fighters, dropships, tanks, APCs, and jeeps round out the more significant inclusions, and there are plans to allow players to commandeer Breed vehicles and weaponry as well.

Breed for the PC will land in stores this fall. An Xbox version is planned for release during the middle of 2003. 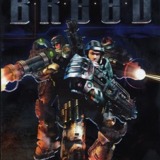