CDV's WWII RTS, Blitzkrieg, is on display at E3. We have new impressions and screens.

Blitzkrieg isn't scheduled for release until mid-2003, but it is already well into development. Playable in public for the first time here at E3, the game is a real-time strategy war game set in the World War II era. Players will assume the role of commander in the Russian, German, or Allied armies, with the goals of building forces and winning the final battle that decides the war.

In all, there are three campaigns, each ranging between seven and 10 battles. Locations vary widely, from the Ukraine and Poland to exotic fronts, such as northern Africa and Spain. Terrain and weather conditions play a significant role in the game. Jungle and desert flooring can hinder untrained troops, while rain, mist, and snow further transform the landscape into a boggy mess.

The version here at E3 seems similar to the majority of existing RTS games--tiny units moving en masse to control a huge map--but there are also subtle improvements that give Blitzkrieg its own footing. Although the terrain is mostly composed of 2D sprites, vehicle and soldier units are made from 3D texture-mapped polygons. It's difficult to see why tiny polygonal objects are any better than tiny sprite objects, but the resulting real-time shadows and variable terrain damage show off the benefits of 3D modeling. The movement of larger vehicles, namely tanks and aircraft, is also a lot smoother, thanks to the precision afforded by a 3D physics model.

Units and structures are drawn based upon realistic designs of the period. There are more than 150 types of vehicles and machinery, more than 30 different infantry units, and more than 250 types of buildings and objects. "We have an in-house World War II historian who has to approve everything. If it wasn't possible back then, he won't let us put it in the game," says Michael Allenson, PR manager for Nival Interactive, the game's developer.

Allenson continues, "A lot of RTS games have realistic scenarios and units, just like Blitzkrieg. Where we take it further is in all of the little details that our game delivers with the typical gameplay." Snipers can use their sneak mode to crawl right through enemy territory to take out entire artillery crews, and an infantry squad inside a house can sit quietly in preparation for an ambush. Tanks and artillery, while powerful, take more time to reload than machine gunners and antiaircraft placements. Bombers, scouts, and other aircraft fly in realistic formations to their target, but they can also be shot down quite easily by antiaircraft fire. You can even send your planes into the air to shoot down the enemy's aircraft.

Less subtle is the game's damage model. Infantry soldiers observed in the demo were unable to even dent oncoming tanks--unlike many RTS games in which you can destroy anything given enough time. However, a tiny howitzer was able to destroy three of four oncoming Panzer-IIIs simply by going for the weak spot, where the turret and vehicle joins. Trenches are another unique aspect in that you can order your troops to dig ditches--that way, enemy vehicles won't be able to easily invade your staging area.

In addition to the three lengthy single-player campaigns, Blitzkrieg will ship with a number of multiplayer skirmish maps, a random map generator, a campaign editor, and a unit editor for the creation of custom units. The campaign and unit editors offer a whopping amount of customization. Not only can you create your own campaigns and units, but you can also fill in the appropriate history of the campaign and model the vehicles yourself. According to Allenson, "If you want to defend the beach at Normandy with AT-ATs from Star Wars, you can do so. Terrain, buildings, foliage, and units are all 100 percent customizable."

Blitzkrieg is being developed by Nival Interactive, the company responsible for the Rage of Mages series of role-playing games. The game will be released in mid-2003, and the planned system requirements include a rather friendly Pentium-II 366. 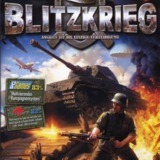