The upcoming game based on the Tom Clancy novel will be playable at E3.

Ubi Soft will be demonstrating the PC version of The Sum of All Fears at its booth at E3 this year. The game is an adaptation of the upcoming movie based on the Tom Clancy novel of the same name, and, according to the publisher, it'll be the most arcadelike game in the series thus far released. The game puts you in command of an elite FBI hostage rescue team whose job it is to trot the globe in a mission to foil a conspiracy bent on damaging the United States government. It will all culminate in a nuclear explosion on US soil, which will lead you to such diverse locales as South Africa, Lebanon, and Israel, among other places, in your mission to uncover and eliminate the group behind the plot.

The Sum of All Fears is being built around the Ghost Recon engine, but its gameplay will differ in a variety of ways. Most of the missions you will engage in will take place in cramped, indoor environments, as opposed to the expansive outdoor environments of Ghost Recon. Further, rather than controlling squads of six soldiers, you will only be responsible for two other squadmates. The behaviors of squads outside of your primary charge will be fully scripted, thus disallowing any sort of direct control.

The Sum of All Fears will feature six multiplayer maps, all of which will have an emphasis on close-quarters combat. You will be able to fight in a variety of locations, including a parking garage, an art gallery, a reservoir, and the "killhouse"--the site on which the game's training missions will occur. The sixth map is actually developer Red Storm's studio-offices in Morrisville, North Carolina, which have been fully and faithfully re-created for use in the game. There is also the possibility that the game will launch with a mission-editing utility, which will let you create your own multiplayer maps on which to host battles.

We'll have more information on The Sum of All Fears for you once E3 commences and we're able to get our hands on the game. Until then, check out our previous coverage of the game. 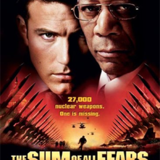