Sabotain is still early in development, but publisher CDV has released a few more screenshots to whet players' appetites. The screens are primarily of buildings and locations, but if their clarity is any indication, the game will put current 3D accelerators to the test.

The game looks to blend traditional first-person shooter gameplay with open-ended role-playing elements. In short, think Diablo II. Players can choose one of two characters in the single-player quest mode, or challenge multiple human opponents in the multiplayer mode.

"Sabotain is a mission-oriented adventure revolving around interactions with both people and places, as well as various mission types, including sabotage, infiltration, rescue, intelligence gathering, thievery, reconnaissance, assassination and all-out combat," said Axel Rathgeber, a producer for CDV. "The RPG elements are supported by an extensive storyline with lots of mysteries to solve. The game comprises a large cast of characters with their own ambitions, who can become your friends or foes."

A demo of Sabotain will be released this coming winter, and the full version will land in stores in mid-2003. The game is being developed by the Russian development group Avalon Style Entertainment, which was previously responsible for the PC game Clay Dreams. 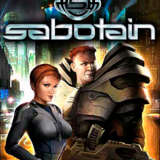