MLB SlugFest 2003 is the latest addition to Midway's ever-growing lineup of larger-than-life sports games. Like NBA Jam, NFL Blitz, and NHL Hitz have done before it, SlugFest takes liberties with the rules--in this case, the rules of baseball--in an attempt to streamline and simplify the game, down to its core elements. In the past, the result has been a series of sports games that are fun for fans and nonfans alike. From the looks of the mostly complete MLB SlugFest 2003 build that Midway has provided us on other platforms, the company is on track to repeat that success.

While traditional baseball games have become tangled webs of batting cursors, pitching icons, and other sim-oriented tools, SlugFest is stripped down to a handful of pitches and swing types. The pitch location grid is broken up into nine spots. The pitcher picks a pitch type and then throws to one of those nine locations. The batter then times his swing while trying to pick the same location the pitcher chose. Once on the bases, things get a little rough. The attack button is used in conjunction with the turbo button to knock down opposing players. So base runners can hack away at any ball-carrying fielders. If timed properly, you can avoid tag-outs. If used against a fielder who is holding your runner on base, he may drop the ball and give you an opportunity to move to the next base. In the field, you have the opportunity to jump and dive for balls that seem out of reach. All in all, the game feels a lot like the classic 8- and 16-bit baseball games of old, with just enough strategy to keep it interesting, but not so much that you're worrying more about strategy than simply trying to crank the next pitch out of the park.

One of the pitch options is to bean the batter. Doing this has a random effect. Usually, it will merely lower that batter's stats for the rest of the game. But occasionally, it will set the player on fire. Players remain on fire until they get out, and fired-up players move and throw faster and hit better than the average player.

The MLB- and MLBPA-licensed game has all the real teams, players, and stadiums. A lot of work has gone into the player models and textures, and it shows. Players are easily identifiable both at the plate and in the field. The stadiums look sharp, and the game animates really well. The sound is typical baseball stuff, but the two-man commentary really goes the extra mile and delivers some amazingly funny lines. Time will tell if there's enough variance in the commentary to keep it entertaining for more than a few games.

MLB SlugFest 2003 is scheduled to go gold over the next few weeks. Most of the game is intact, and the developers are currently tweaking the gameplay and AI, which is a little lacking in the current build of the game. Hopefully, Midway will use these remaining weeks wisely and fix the lapses in the AI players' judgment. SlugFest will hit store shelves this summer. 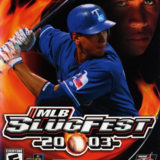