The footage depicted several skaters jumping off ramps, grinding on rails, and stringing together combos for points, and the levels shown included a pair of skate parks filled with onlookers, as well as a warehouse level. Interestingly enough, some footage also showed off Solid Snake grinding and performing ollies with the best of them in none other than the Big Shell level from Metal Gear Solid 2: Sons of Liberty. Konami says that Snake and Big Shell are both unlockable in the game.

We'll have hands-on impressions of Evolution Skateboarding from the show floor during E3. In the meantime, be sure to take a look at this latest batch of screenshots of the game. 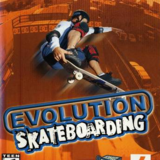