Nintendo gave audiences a look at its upcoming Mickey Mouse title for the GameCube.

During the Nintendo press conference, representatives gave audiences a look at the upcoming Disney's Magical Mirror Starring Mickey Mouse. The premise behind Disney's Magical Mirror places players in the role of Mickey's dreamtime persona. As Mickey steps out of his snoozing body, he steps through his dresser-top mirror and explores the dreamworld. However, through happenstance, the mirror shatters, so Mickey is stuck on the other side, where he must collect the scattered pieces of the broken mirror and stop the meddling of a gang of malicious ghosts to return home.

As Mickey moves from room to room, he must solve a variety of puzzles, trick his enemies with spells, and pull off gags to reveal and recover the shards of the mirror. Mickey is capable of feats of great magic in this dreamworld--feats that are reminiscent of his abilities in Fantasia. In the footage we've seen, Mickey was able to bewitch a room full of cutlery, enchanting them with a spell, which compelled them to dance and sway. He was also able to enlist the aid of animated brooms to perform cleaning duties. Whether by the ingestion of magic potions or the casting of a spell, Mickey was also shown growing to great heights, nearly filling the entire room he expanded within.

While most of the game should take place in standard third-person platforming style, during certain areas, you will be challenged to undertake different tasks and their corresponding styles of gameplay. Mickey will have to race down a mountainside on a snowboard, play a guitar in a rhythm game sequence, and also pilot a propellor-driven aircraft above the clouds.

As you traverse the game's various areas, you will be able to collect souvenirs for your room, including Minnie's bow and Pluto's collar. These items will be represented in Mickey's bedroom upon the game's completion. You can also connect Disney's Magical Mirror with Disney's Magical Quest Starring Mickey and Minnie for the Game Boy Advance, which should provide much-needed assistance during the GameCube game.

Disney's Magical Mirror Starring Mickey Mouse is currently slated for release this August on the GameCube. Stay tuned for our hands-on impressions of the game from Nintendo's booth. 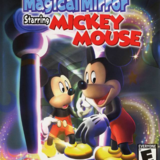