The day walker's next adventure will be on display at Activision's booth.

Blade II will be on display at Activision's booth this year as a part of the company's extensive lineup of comic-book-related games. Though its title suggests otherwise, Blade II is actually an extension of what happens in the recently released movie rather than a game based on the events in the film, but certain elements, such as enemies, have been directly inspired by the movie. The game is pretty straightforward--you'll have to fight your way through hordes of enemy vampires by using Blade's traditional arsenal of weapons, including shotguns, stakes, and the sword of the day walker. Blade II won't be all action--there will be times when you'll have to use your puzzle-solving abilities to get past certain areas.

Interestingly, the combat system isn't like that of a typical beat-'em-up. Instead of pressing the face buttons to perform punches and kicks, you'll have to press the right analog stick in the direction of an enemy to perform an attack. This is especially helpful when fighting large groups of enemies (up to 30 enemies can be onscreen at once), because you'll be able to perform quick attacks when you're not even facing an enemy. While you're fighting enemies, you'll also have to keep close watch over the meters that appear near the bottom of the screen. The green bar displays Blade's health level, while the other bar shows his serum level. If the serum level is high, Blade can regenerate faster and access his blood rage attacks more easily.

The blood rage meter essentially functions as Blade's special ability meter. When he reaches the first level of blood rage, he can use the day walker sword (unfortunately, he can't just use it normally). The second level of blood rage gives him better defensive capabilities, and the third level gives him extra strength. You'll have to use the blood rage quite often while traveling through the game's four areas, which are divided into levels. We'll have more on Blade II from the E3 show floor. 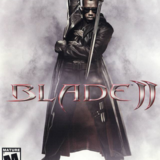