Lucky E3 attendees were able to sample playable builds of both the PlayStation 2 and XBox versions of Test Drive, Infogrames' popular racing series. Although both versions are crisp, speedy, and feature many courses of joyous street racing, it's the XBox's work in progress that ultimately comes out ahead.

Like the PS2 version, Test Drive on the XBox will feature four main cities, approximately 16 courses, and 25 cars' worth of racing action. Unlike the PS2 version, however, the XBox version has a higher overall resolution, which results in racing environments that are sharper and less jagged than those found on Sony's console. The XBox version will also support in-game Dolby Digital 5.1 audio, a feature that will let the game produce a fully spherical field of sound around the game player.

After I took the game out for a spin, I discovered that Test Drive plays wonderfully. Car handling is on the arcade end of realistic, with spinouts, drifting, and oversteer kept to a minimum. At the same time, however, it's possible to steer in circles or crash into structures, provided you consciously decide to drive your vehicle into danger (or happen to end up slapped around by an opponent). While it's hard to convey such a balance with mere words, the overall give and take between realism and comfort in Test Drive is quite satisfying.

Also satisfying are the game's courses, all of which are lengthy sections borrowed from a number of real-world cities. Portions of London, San Francisco, Tokyo, and Monte Carlo are re-created with striking detail. As I was touring the San Francisco stage, I noticed that the developers included not only the tollbooth at the downtown end of the Golden Gate Bridge, but also the Safeway store near Fisherman's Wharf. I tried to drive to the GameSpot offices, but sadly, the track in the E3 version ends at the Bay Bridge.

Realism aside, Test Drive looks pretty too. Each car model is composed of more than 4,000 polygons. As a result, you can see inside the car windshield and view your animated driver doing his business, and you'll witness dynamic shadows cast from the surrounding environment as well. As I played the game, I couldn't help but marvel at how the separate leaves on trees were re-created in both reflection and shadow on the back of the car. Clouds in the sky also affect the shadows cast onto vehicles by dimming the ambient light in the environment.

As noted above, the XBox version of Test Drive displays in a higher resolution than does the PS2 version. As a result, track signs are that much more legible, windshields are that much more glassy, and the overall look of the game is one of decadent reality.

Test Drive for the XBox will be available just after the XBox launch in November of this year, just in time for Christmas. 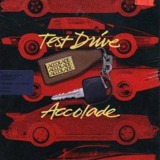