As a budding stuntman, it's your job to fulfill the director's wishes. The team from Driver brings its Hollywood-inspired driving game Stuntman to E3.

In a private meeting away from the show floor, Infogrames was displaying its Hollywood-inspired driving game Stuntman. Developed by Reflections, the same company responsible for the Driver series, the game tasks the player with completing a series of stunts for a demanding movie director.

The action in Stuntman is a direct homage to popular Hollywood films and TV shows from the past 20 years, including such favorites as The Man with the Golden Gun; Lock, Stock, and Two Smoking Barrels; and Dukes of Hazzard. Stuntman will feature six different locations: London, Switzerland, Monaco, Louisiana, Bangkok, and a bonus arena track. Each location will contain between two and four film shoots, the sum total of which will be combined into an end-of-shooting movie trailer.

Before each area, the director tells you the specific stunt combination he'd like you to perform. For the most part, the stunt driving will require you to execute a number of spinouts, jumps, and death-defying crashes involving a bevy of prop scenery. One level will call for you to leap through a moving train car, while another will send you flying over a wide riverbed. A 75-percent rating will move you to the next shoot, while failure will shatter your car into a collection of tiny bits. At the end of each shoot, Stuntman will piece together your stunts with rendered movie footage and display the presentation in a Hollywood-style movie trailer. These trailers can then be saved and viewed later as often as you wish.

Since the game itself is only 20 percent complete, Stuntman's visuals are currently lacking in detail and clarity. The car models are complete, but background buildings and streets are limited to textured cubic structures and a few signs here and there. When completed, the game will feature a different car for each of the 20 filming areas. The car models aren't official re-creations, but knockoffs of the Aston Martin, Shelby Cobra, and Ford Capri are already quite noticeable. While the game features a realistic driving model, car damage is arcadelike in execution, as doors, fenders, and hoods were falling off with vaudevillian frequency during the exhibition.

We weren't given much play time with the game, but in the short time we spent with it, the similarities to Driver were apparent. The control scheme is exactly the same. As such, careful monitoring of speed and the mastery of skids is important to completing stunts. One thing we really liked about the game was the fact that not only can you drive over buildings, but you can also go inside them. Since the doors and windows of most buildings are breakaway objects, you can actually drive around inside the hotels, pubs, and churches scattered around the movie sets. Small details, such as a knock-away DSS dish on the roof of one building, also give the game a sense of life.

Stuntman is scheduled for release in mid-2002. 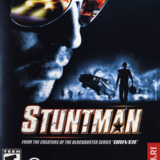