Splashing into E3, Infogrames' Splashdown is a Jet Moto clone that may delight PS2 owners.

Splashdown is Infogrames' answer to Sony's Jet Moto and Nintendo's Wave Race. Up to four players can select from any of 10 different personal watercraft and bring them onto a selection of island courses for races involving waves, jumps, and a variety of other floating obstacles.

When complete, Splashdown will feature 18 different locations, ranging from the Everglades and the Amazon to Venice and Africa. Each course will command the player to navigate an enclosed circuit, which involves leaping over ramps, swooping past logs, and performing tricks to build up speed. Indeed, what Splashdown has over competing titles is the correlation between tricks and speed. The more tricks you do and the more complex they are, the faster your Jet Ski will go. If you refrain from performing tricks, you'll find yourself in last place.

In taking the game for a spin, the major thing we noticed, beside the bouncy, almost trampoline-like handling, was just how well the trick system has been implemented. You can perform tricks while accelerating, in midair, or on obstacles. With a tap of L2 or R2 and a directional press, we were performing log grinds, kick flips, and side kicks in no time. As the Jet Ski picked up speed from the onslaught of tricks, the pace of the game quickened to a harrowing pace, but the frame rate didn't stutter once.

While the frame rate is glassy smooth, the texture quality and resolution seem a bit low for a game scheduled to come out during the busy holiday 2001 shopping season. Although the transparency and motion effects for the waves and water look wonderful, there is an overall jagged, pixilated appearance to the game that's comparable to the appearance of early first-generation PS2 titles. An Infogrames representative did suggest that the game would be much improved by its release date, so perhaps the inclusion of antialiasing and mip mapping will smooth the rough edges.

Regardless of the fuzzy look, Splashdown has a physics engine that's a joy to feel. Waves and choppy water can slow down your watercraft, while gliding alongside larger waves can improve your overall speed. Just like in real life, a harsh landing after a lofty jump will kick up a plume of water. The effect is visually impressive, but it's also a speed killer, something that left us in last place on a few occasions.

We'll have more on Splashdown later in the game's development. 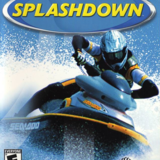