The sequel to Rogue Squadron is heading to the GameCube. Check out our hands-on impressions of the game.

Rogue Squadron was, by far, the Nintendo 64's best Star Wars game. It sold well over a million copies, so it only makes sense that LucasArts is preparing the sequel for the GameCube. You may play as either Luke Skywalker or Wedge Antilles, and at the beginning of each mission, you choose a ship from a virtual hangar. There are several hangars included in the game, and they're located on a variety of planets. While inside the hangar, you may view all the ships that are available, but in order to use each ship, you must unlock it first. LucasArts claims that showing you ships that you can't yet fly will motivate you to earn medals and open up more spacecraft. There will be six ships in the final version of Rogue Squadron II, including the snow speeder, but thus far just the X-Wing, B-Wing, and A-Wing have been added to the game. Ships may also be changed in the middle of a level by locating a landing pad and parking the original ship.

The version of Rogue Squadron II that is being shown at E3 includes just three levels: Bespin, Razor Rendezvous, and Yavin. Bespin features dogfights above a huge golden city. Each and every building in Bespin features bump mapping and real-time light refraction. Bespin is crawling with turrets, and you may dip down into the trenches of the level and take out generators that control entire banks of turrets. In Razor Rendezvous, you must attack a Star Destroyer using a B-Wing and square off against the hordes of tie fighters that buzz around it. In the Yavin level, you must fly through the trench of the Death Star while dodging turret fire, enemies, and steel pillars that are draped across the trench. If you fly too high, the turrets will cut you down and the mission will end. LucasArts spoke briefly about Rogue Squadron II's Battle of Hoth level. While there are AT-ATs stomping about the levels that must be dropped using a tow cable, there is a great deal more interaction than that. Imperial ground troops will attack in waves, and while you're trying to prevent them from making any headway, you have to keep the lumbering AT-ATs at bay. It's a juggling game, and one that LucasArts hopes will enthrall players. The interface for dropping the AT-ATs has also been altered. You will now be able to monitor the amount of slack in your tow cable, so you'll know whether to cut it closer or swing out wider while circling the AT-AT.

The control scheme used in Rogue Squadron II is similar to the interface used for the original. The right shoulder button acts as the accelerator and the left shoulder button acts as the brake. If you pull the right shoulder button all the way in, it will click, and the wings of the ship will close, preparing it for hyperdrive. The opposite can be performed with the left shoulder button, allowing for extremely tight turns. The main weapons are fired with the large A button, and secondary fire is accomplished with the red B button. The primary blasters are dynamic in that if you wait for a lengthy period of time, they will have an optimal amount of power. If you press the fire button infrequently, they will fire short bursts. If you constantly tap the fire button, the blaster will fire like a machine gun, but each blast's potency is greatly reduced. Pressing the X button will send the game into a camera filter that appears similar to infrared. When in this visual mode, enemies that are essential to the mission objectives are displayed in yellow, while enemies that will likely need to be destroyed to achieve a medal are depicted in purple. Pressing the Y button calls your two wingmen to your side, and they may then be instructed to perform a wide range of tasks. If you're locked on to an enemy, you can send your wingmen to take it out. If you're blasting turrets, the wingmen will quickly catch on and join you. Controlling the camera is accomplished with the C analog stick, and it comes in handy while shooting down the Death Star trench to check for enemies both above and below. If you take a specific amount of damage, R2-D2 will begin repairing your ship if you're flying the X-Wing. While piloting a snow speeder, the gunner will physically begin fiddling with the ship, hoping to get it back into working order.

Rogue Leader is undoubtedly one of the GameCube's most visually impressive games. Some scenes are being rendered with well over 10 million polygons being displayed per second with all the GameCube's onboard effects being implemented. Even in the sprawling city of Bespin, you may swing your ship around quickly and the game does not slow down. The detail included in the Star Destroyer is especially astonishing. The massive ship's exterior includes thousands of small indentations and coves modeled completely out of polygons. Real-time lighting is used for each and every laser blast, and you can see the light emitting from each bolt as it screams down the Death Star's trench. Firing your laser cannons while close to any object will send light spraying across it, and the ships, buildings, and ground textures feature some impressive bump mapping.

LucasArts stated that Rogue Leader was started shortly after last year's Space World show and therefore has only been in development for six months. Considering the company has the same length of time to finish it, Rogue Squadron II is shaping up to be one of several must-play games for Nintendo's GameCube. 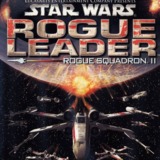