Scorpion is a new FPS from Akella and developer B-Cool Interactive. We take a first look at E3 2007.

Showdown: Scorpion is a new first-person shooter from publisher Akella that apparently takes place in the early 2030s, when corporations run most of the world. After discovering ancient tunnels beneath Sudan, one of the largest corporations sends a search team to scout it out, which disappears. They then send a half-dozen rescue teams to the site, all of whom either mysteriously die or vanish themselves. Soon enough, evidence of a buried alien civilization appear after the ruins are finally explored, and soon after, their technology begins to be used to create new weapons and genetic engineering techniques. You take on the role of a Russian special agent who's sent to infiltrate one of the terrorist organizations that use these new weapons to attack Moscow, only to find yourself kidnapped by the organization's scientists and being genetically modified yourself before managing to escape.

Follow all that? Probably not, but it doesn't seem to matter too much, as Showdown: Scorpion seems to be a fairly straight-ahead shooter. There are supposedly two methods to the madness here: Either you can proceed stealthily and attack your enemies with silenced weapons, or you can go to town with a number of modern and futuristic weapons if you wish to just blow some stuff up.

The weapons here are, at least in the section that we saw, a fairly normal group of pistols and machine guns, including a slightly advanced model of the venerable AK assault rifle family. There are going to be some wackier weapons on hand, though, such as the quote-unquote "gravity gun," which shoots out a ball of gravity that violently repels anyone near the center of the explosion away from it. In addition, the genetic experimentation that was performed on you will let you enter a bullet-time state to slow down your enemies, a la Max Payne, or even in some cases psychically dominate your enemies and force them to fight for you.

While Showdown: Scorpion doesn't seem like it's going to break a lot of new ground in the FPS genre (the publicists are fairly straightforward about its resemblance to games like F.E.A.R. and Timeshift), it should still provide FPS fans with a new game to play around with when it finally arrives on store shelves sometime in the first half of 2008. 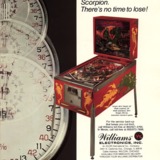