SANTA MONICA, Calif.--Game announcements are the bread and butter of every Electronic Entertainment Expo. Keeping with that tradition, EA announced today it would be drafting a new football game to its roster, titled NFL Tour.

While scant on details, NFL Tour will attempt to capture the excitement of a traveling show. Players will set out to win an NFL contract by participating in an arcade-style fantasy NFL road show. Though not part of the regular NFL season, EA will still be flexing the full force of its exclusive rights to the NFL license by incorporating real players and real teams. Players will pass around the pigskin in stadiums newly created for the game.

While EA isn't new to the arcade-football scene, it has indicated the game will be a different kind of experience than its typical football offerings. According to the game's executive producer Dale Jackson, NFL Tour "will appeal not only to football enthusiasts, but also to casual gamers." Last November, EA released NFL Street 3 on the PlayStation 2 and PlayStation Portable.

NFL Tour will be developed by EA Tiburon, the same squad behind EA's popular Madden football series. It will be available for the Xbox 360 and PlayStation 3 in January 2008. 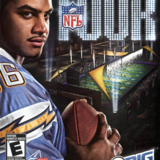