Daffy's clearly impressed at scoring a starring appearance in his new Nintendo DS game. We checked it out to see if he's right to be pleased.

When you load up Daffy Duck's first Nintendo DS game, you can see that he's clearly happy to be taking the lead in his own title. It's an opening that takes clear inspiration from the famous screen in Mario 64 where you could manipulate Mario's face, except here you drag the Looney Tunes duck from side to side to choose single- and multiplayer options. We delved deeper into the game itself to see if it offers something worthy of Daffy's starring role.

The game is based on a famous Daffy cartoon where the duck fights a losing battle against an embittered artist. The cartoon itself is considered by aficionados to be one of the best of all time, perhaps being the first example of postmodernism in Looney Tunes cartoons. Well, the famous sketch has made it to video game form as a collection of minigames where Daffy is still harassed, only this time by your stylus as opposed to an artist's pen.

We only had a limited amount of time with the game, but we still managed to check out a few of the 20 games on offer. The first one was a simple game where a black blob was trying to squash Daffy--he was erecting poles to hold the dark mass up, and it's your job to try to chip away at the sticks and generally get on his nerves. The second game used the microphone to blow away items on the screen, with more and more puff required to blow heavier items away. We were promised a bunch of other games that would even allude to classic arcade titles such as Pong.

The multiplayer side of the game supports two players, and while you'll both need a cartridge, some of the three minigames on offer sound pretty interesting. A hot-potato-style game will see you tossing a potato between screens and trying to avoid holding it for too long. As we mentioned before, there will also be Pong, and this will be playable wirelessly between two consoles.

Some of the more interesting features of the latest Daffy title seem to occur outside the main game itself. The game allows you to record your voice and have Daffy say it at certain points. There's also a feature for which the developers had to gain special permission from Nintendo in order to implement. Basically, Daffy will lament you if you close your DS and leave him in the dark, and if you do it repeatedly he'll shout out at you to tap the left and right shoulder buttons. The feature could potentially drain the battery, which is why Nintendo was apprehensive about allowing it; but they eventually granted permission because of the way it was being used.

Looney Tunes: Duck Amuck seems a little limited with only 20 minigames, and the lack of wireless multiplayer game-sharing makes it look fairly old-fashioned in comparison to some of Nintendo's recent feature-packed releases. However, if you're a fan of Daffy Duck, you'll see that he has been shrunk down with all his trademark anger intact, and the game has some potential if it fully exploits the Looney Tunes sense of humor. Our look at the game at this year's E3 was painfully short, so we look forward to bringing you more very soon. 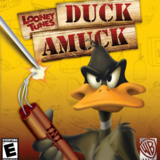