This colorful and unique action game has you playing as an insect detective in a film noir world.

Though Insecticide is an action game, it will undoubtedly draw comparison to games from the golden era of LucasArts, but when you consider the histories of the developers behind it at Crackpot Games, that's perhaps fitting. This is because Crackpot Games has developers that are veterans of such games as Day of the Tentacle, Full Throttle, and Grim Fandango. These are all games that had memorable stories, characters, and settings.

Insecticide is set in the distant future where highly evolved insects have inherited the Earth. (Humans have dumbed themselves down so far that now they're just laughable primates.) These insects have built a civilization that wouldn't seem too far out of place in a film noir movie, and you'll play as a young police detective named Chrys. She and her partner Roachy are drawn into a mysterious case that involves a long-unsolved case from Roachy's past, as well as a more recent murder.

This is a game that will combine lots of action with scenes and levels that are inspired by the entire genre of detective movies or books. You'll battle it out using a variety of insect-inspired weapons, such as the pollen gun. But you'll also partake in stakeouts, hostage negotiations, and prisoner interrogations. The game features plenty of humor, from the screaming police captain to Roachy's narrative dialogue.

Insecticide is going to appear on a couple of platforms. A Nintendo DS game will come out at the end of the year, but it will also appear for the PC as a downloadable game early next year. The short glimpse that we had at Insecticide has us looking forward to learning more about this game because it really feels like an intriguing mix of action, humor, and story. 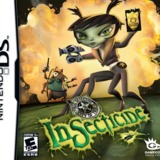