Square Enix showed us a quick localized demo of its upcoming portable mech battler, and gave us some more in-depth details as well.

The Front Mission series of strategy role-playing games stretches back to the days when the "Square" half of Square Enix was simply Squaresoft. Front Mission first appeared on the Super NES, and since then, the franchise has only shown up sporadically in North America (a number of entries haven't made it outside of Japan). Luckily for fans of this giant-robot strategy series, Square Enix has a nice little handheld package coming for Nintendo DS owners, titled simply Front Mission. We got to take a look at the game's features and found out what kind of content it will contain in a meeting with company reps today.

Most of Front Mission on the DS will be composed of missions and the storyline from the original Super Nintendo game and its successor on the PlayStation (you know, the first one). The game details the strife between two militarized factions, the Oceanic Community Union (OCU) and the United Continental States (UCS). These two factions have annexed Huffman Island, and after a period of armed conflict in which ownership of these territories is disputed, the groups' leaders have declared a cease-fire. Unfortunately, tensions again build when an OCU officer named Roid enters UCS territory for unknown reasons. Both sides are armed with battalions of giant bipedal robots, and the game's combat is carried out between them. Expect a lot of wreckage on the battlefield, in other words.

In the original Super Nintendo game, only the OCU was playable, and then the UCF was added on the PlayStation. Both of these factions' mission sets and story arcs from their respective games will be included in the DS version, and a total of 10 additional missions have been added (five for each campaign). Additionally, new characters featured in Front Mission 5 and Front Mission 2nd will pop up in the revised storylines, and you'll also find weapons and mechs that didn't appear in the original games. (These new additions wlil be taken from the Japan-only Front Mission Online.) Lastly, there's been a decent graphical upgrade applied--the battlefield tile sets have been redrawn with greater detail, and ambient details like floating clouds and more noticeable lighting and shadows have been added to the mission graphics as well.

On the gameplay side, it looks like Square Enix has adapted Front Mission to the dual-screen setup pretty well. The game now relies on the touch screen heavily for its controls--you'll be able to simply point and tap where you want your units to move, for instance. Additionally, the original game had to switch between the overhead map view, statistical displays, and up-close combat interactions. Now, the map view will always remain visible on the bottom screen, with a more detailed stat view occupying the top screen (and being replaced by battling mechs when you actually enter combat).

Front Mission for the DS looks like it's shaping up to offer hardcore fans of the series a nice portable package for some mech-battling on the go, although the reused campaigns may be a letdown to those who have already played the original games ad nauseam. This does seem like the best way for newcomers to the series to check out Front Mission for the first time. Front Mission will be available on October 23. 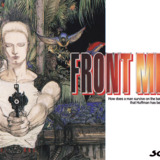