When developer Mad Doc Entertainment showed us Empire Earth III at the beginning of this year, the company stated that it would spend a lot of time polishing and balancing the game. Though the game is still four months from release, Mad Doc is currently in the midst of the polishing and balancing phase, and there have been some big changes since we saw the game just a couple months ago.

The company received a lot of feedback from some of the biggest Empire Earth fans after its Empire Earth University event in early May. Along with the feedback from a semipublic beta test, several key changes have been implemented. First, the concept of a modular user interface that you could customize has been dropped. It turned out that too many testers felt it got in the way too much. Now there's a streamlined interface that's close to final.

A major gameplay change involves the addition of technology points, which are now the third resource in the game. Previously, you used wealth to do everything from researching technology to "epoching up" (advancing to the next major technological age in the game), buying heroes, and more. However, the feedback was that wealth started to become relatively worthless, because by the end of the game you had more money than you could possibly spend. So Mad Doc introduced technology points, which are tougher to generate than wealth and are used to epoch up and research new technologies. Tech points are also used to purchase heroes or siege engines.

Mad Doc also showed off some of the new weapons and units in the game, including the nuclear missile, which is becoming something of an obligatory feature in strategy games. When you select a nuke, the cursor turns into a nice, animated mushroom cloud just to remind you that you're playing with nuclear weapons. Click on the map and the missile flies in and the blast vaporizes the units around it, though we did notice that some buildings managed to survive. The radius of the nuke wasn't too large, so nukes won't deliver instant victory. 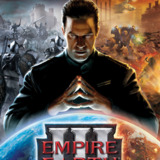