Firefly wants to correct the impression that you may have about dungeons and goblins with this humorous action game.

Remember the discussion in the movie Clerks where the two main characters sympathize with all those contractors who must have been killed when those dastardly rebels blow up the Death Star? That's sort of the philosophy behind Dungeon Hero, a 2009 action game that will have you playing a hero trying to defend poor goblins in a dungeon from evil creatures and annoying adventurers.

Dungeon Hero is coming from Firefly Studio, the developers behind the Stronghold strategy games, but it is very much a hack-and-slash action game with role-playing elements. The two main elements of Dungeon Hero are thus: to create a logical world that's a departure from the portrayal of dungeons is almost every other game, and to create a combat system that evolves from the frantic button mashing found in the genre.

Firefly's biggest problem with dungeons in most games is that they don't make sense. Think about it. You'll delve down into a dungeon and encounter monsters whose sole purpose in life is to stand around in the dark until an adventurer comes to kill them. Dungeon Hero looks to solve that problem by creating an underground city and society that makes sense. The main goblin city in the game is divided into four districts, each of which has a distinct purpose and role in the game. And while the goblins are at the heart of the game, you won't play as one. Instead, you'll play as a human mercenary who the goblins hire to save them after a goblin miner manages to dig a bit too deep and opens a fissure to someplace he shouldn't have. So now the goblins need, well, a hero.

Your job as that hero will be to battle the monsters coming out of the fissure, as well as the occasional surface adventurer who comes into the dungeon looking for treasure. The combat system is being designed so that it allows you to do all sorts of cool moves, such as head butts, knee kicks to the groin, and more. Instead of just mashing the attack button over and over, you'll try to employ a library of more than 200 moves simply by using context-sensitive controls. For example, if your character is surrounded by hordes of enemies, you can perform shield blows by attacking the character to your side, or strike at the guy behind you by selecting him. The system is a bit more complex than that, but considering that the game isn't due until 2009 and all Firefly had on display were some concept screens and short demo movies, we'll have to wait a while to learn more.

Still, Dungeon Hero looks like it's going to be a very humorous game, judging from the tone of the cutscenes and trailers that we've seen. We'll find out more over the coming months, so check back with us for the latest on the game. 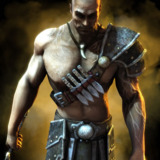