We head into battle with Ichigo in our hands-on preview of Bleach: Shattered Blade.

Quick, can you name the number 7 most-watched anime in Japan right now? If you answered "Bleach," give yourself a pat on the back because you're right on the money. The show is also popular in North America, having just completed its first season on the Cartoon Network. Given its popularity, it should come as little surprise that Sega has nabbed the Bleach license and is bringing Bleach: Shattered Blade to the Nintendo Wii.

Like many other anime-turned-games, Shattered Blade is a fighting game. Eight characters from the cartoon will be playable from the start, but as you progress through the game's various modes you'll unlock new fighters for a total of 32 playable characters.

For our first fight we picked Ichigo and took on Renji. After a brief cutscene that introduced each character, we began the first 60-second round of a best-of-three fight. The controls were surprisingly easy to learn. You move with the analog stick and block and dash with the Nunchuk's buttons. Attacks use the motion-sensing abilities of the Wii Remote. You can stab, swipe, and slice the remote through the air to unleash a number of cool-looking attacks and even put together combos. Holding the A button while you swing causes your character to perform a critical attack that dishes out extra damage. As you fight, the spirit gauge in the bottom corner of the screen will fill; when it's full you can activate a bankai attack. Unfortunately for us, it was Renji who filled his meter first, and he unleashed an ultra-powerful attack with a giant snake. The controls weren't always responsive, but once we got into the swing of things and began taking advantage of critical and bankai attacks, things turned around and we dispatched Renji in what was a very close fight. We also held our own in a fight between Sajin and Komamura.

Bleach looks pretty much exactly how you'd expect a fighting game based on a cartoon to look; the characters are large, cel-shaded, and look just like their cartoon counterparts. The animation was quite good, as were the effects, which were used quite liberally. Sega has also procured the actors from the show to provide characters' voices, adding to the game's authenticity.

We didn't get a chance to play the DS version of the game, but we were told that it wouldn't actually be a port of the console version, but an original game in its own right. Both versions will be available in stores this fall. 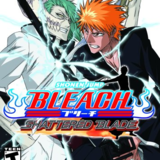